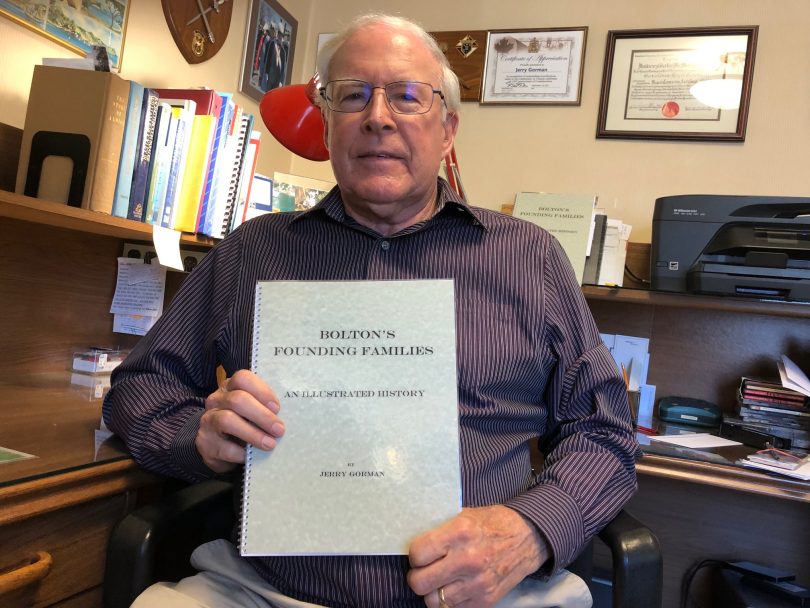 Stand at the intersection of King and Queen Streets in downtown Bolton and for a moment picture it as an untamed wilderness. A wilderness of dense wood where you will share your space with wild animals and swarms of mosquitoes. A wilderness in which you must spend your first winter trying to survive in a drafty log shanty. This reality is only about 200 years old and describes life for the earliest settlers to what is now Bolton. Want to know more?

Jerry and his wife Clare moved to Bolton in 1971. They live in one of the beautiful old homes on King Street West near Jaffrey Creek. Exploring the history and geography of Bolton, both in literature and on foot, quickly became a passion for Jerry.

He became a member of the Albion Bolton Historical Society where he “saw so much history being passed around and talked about, so I was surprised that no one had yet written a detailed history of early Bolton” Jerry says.

It was in 2013 that a conversation with lifelong Bolton resident Isabelle Bottoms inspired Jerry to start “stitching the facts together into a coherent narrative.” For most of the next decade Jerry spent much of his time talking with Isabelle and other residents who had “deep roots in the community.”

Many were willing to share their local knowledge and family histories. “Neighbours who have a passion for Bolton’s history, also assisted with fact checking my dates and details” says Jerry. He acknowledged people like Nicholas Brooksbank, Gordon Goodfellow, Derek Paterson, and Deidre Sweetnam for their tremendous efforts and input.

The inside cover of the book shows the 200-acre lots of each of the 4 founding families superimposed over a (1974) image of the village of Bolton. This makes it easy to see whose quadrant your home sits in today.

In Bolton’s Founding Families you can read all about the Boltons, the Plummers, the Sternes, and others and learn the roles they played in the formation of the village. Jerry describes the book as “a labour of love” and says he tried to tell the stories from the point of view of “flesh and blood people”.

The book incorporates fascinating old photographs and maps. And there is even a brief section about “Bolton present and future”. It is a book that will interest current residents, newcomers, students, and history buffs alike. The book is one that will give you a true sense of place.

Bolton’s Founding Families is self-published by Jerry Gorman, 60-pages, spiral-bound, and available through the author for $19.99. Contact: clare.gorman@bell.net