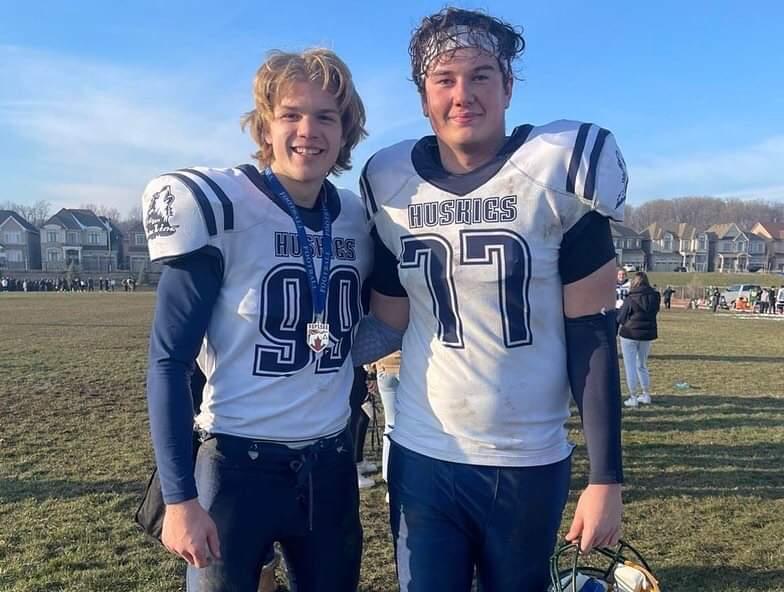 Humble but happy describes two grade 12 students from Humberview Secondary School who recently signed football scholarships with the University of Toronto. Student Christopher Sharples, who makes his home in Bolton, has signed a Letter of Intent to play football at the University in the Fall. Student Kieran Datars, from Caledon East, has signed the maximum athletic scholarship offered in Ontario of $4,500 per year, guaranteed for five years!  It is a moment that is equally proud for the school since it is the first time in Humberview’s 44-year history that any football player has received a scholarship.

Kieran has been a football player since grade 9 and Christopher since grade 11.  Their coach Adrian Piscitelli, himself a Bolton resident, says that both students have come a long way in their journey, tackling challenges, and demonstrating growth as athletes. The two young men were both team captains this year. Additionally they are honour roll students and both volunteer extensively in the school. 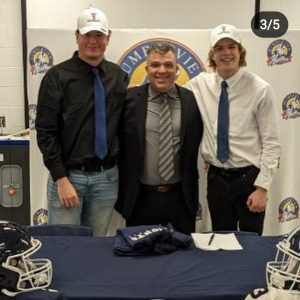 Adrian, who has been teaching at Humberview since September 2019, said “The Humberview Football program is very proud of Kieran and Christopher.  To be offered football scholarships to attend one of the best universities in Canada is an incredible achievement for both of these exceptional young men.  Christopher and Kieran personify the main goal of the Humberview Football program which is to create successful leaders on the field, in the classroom and in the community.”

He continued “At the end of the 2019 season, we introduced a culture change in the Humberview Football Program that focused more on Jimmy’s and Joe’s rather than X’s and O’s. We shifted our focus to building successful people first by working each day on the virtues of hard work, responsibility, collaboration, and dedication. We emphasized each day that these virtues were the key to building a successful team, and that they are transferable skills needed for success in life long after the final whistle in November.  The incredible opportunity that Christopher and Kieran are about to embark on at the University of Toronto demonstrates to us that we are well on our way to achieving our goals. We couldn’t be prouder of these two exceptional young men.”

This year the Humberview Huskies Football team were R.O.P.S.S.A.A. Finalists, coming just short in the championship game. For many years the Humberview Huskies football team has not won a single game, and this generational shift can be accredited to many of the team leaders, especially Christopher and Kieran. The positive results on the field and among the players are also felt throughout the school community.

The two students seem equally grateful and very proud of the spectacular opportunity that awaits them. 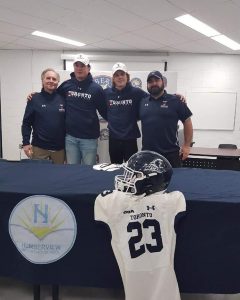 Kieran and Christopher with U of T coaches

Kieran said “I would like to thank the University of Toronto for this great opportunity. I am very excited to attend such a great school and to play football at the historic varsity stadium. I am excited to continue our family tradition as my sister and other family members have attended the University of Toronto.  I would like to thank my teammates and coaches from Humberview for their friendship and support over the past 4 years. I have been a part of the Humberview Football Program since grade 9. The friendships I made and experiences we had, are ones that I will always remember!”

Christopher is equally appreciative and said “I’m extremely proud to receive this once in a lifetime opportunity to represent a world-class University. Ever since I was a little kid I dreamed of playing University football. I still can’t believe my dream has finally come true. I am super excited to attend the University of Toronto and play football for the U of T Blues. I would like to thank the University for offering me this incredible opportunity this Fall!  I would also like to thank my coaches and teammates for the great experience at Humberview the past two years. Our team was a great group and this experience of being part of the Humberview Football program was a something I will never forget. The bonds we formed and life lessons we experienced are ones I will always bring with me in my future.”

On Tuesday December 20th two coaches from the University of Toronto came to Humberview Secondary School for a signing ceremony. Coaches, teachers, School Principal John Colton, parents and teammates came out to support this amazing accomplishment.  Humberview is clearly very proud of these two young men, and what they represent to the school, and the Town of Caledon. They will be a source of inspiration for years to come.