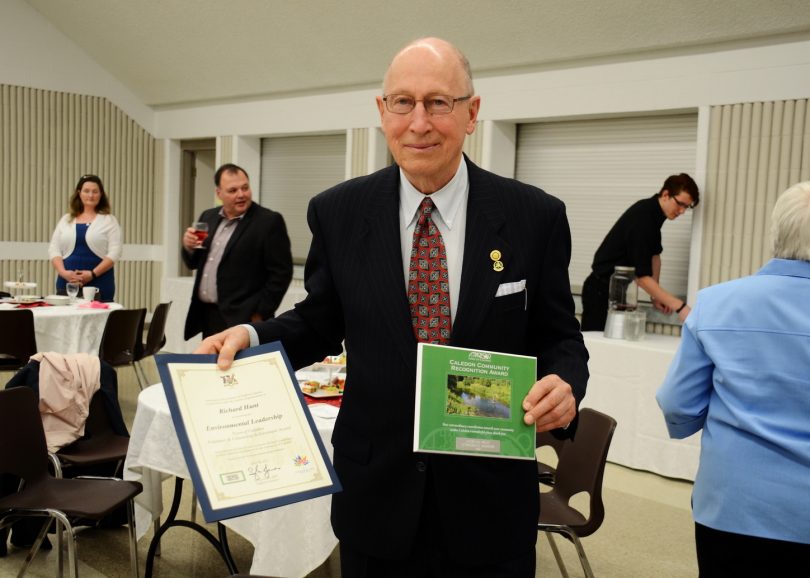 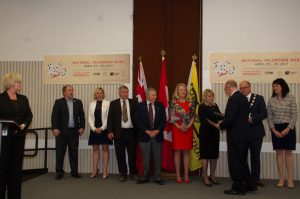 A fellow member of the Bolton & District Horticultural Society submitted a detailed description of Richard’s extraordinary and tireless work to protect environmental assets throughout the town of Bolton….

Richard Hunt has been an active member of Bolton & District Horticultural Society (BDHS) since shortly after its founding in 1995. Richard served many years on the BDHS Board of Directors and participated in BDHS civic beautification projects including the construction of the Pavilion at the corner of Sterne & Hwy 50, Flower Barrels on Highway 50, and planting beds at the Rotary Place/Caledon Seniors Centre and Caledon Centre.  He initiated environmental improvement projects that spanned several years to restore wetlands and native plants in Bolton Mill Park in the Humber River valley.

Over the past 15 years, BDHS focus shifted to tree planting and Richard earned his BDHS nickname “Tree-hugger Hunt”. The projects Richard initiated include multiple plantings of hundreds of native trees and shrubs in Sunkist Woods, Taylorwood Valley, Dick’s Dam Park, Rotary Peace Park, Columbia Creek, Foundry Park, Bolton North Hill Park and Caledon Animal Shelter (Coleraine Park).  The survival rate of plantings he organizes is remarkable – thanks to his foresight in requiring beaver guards on trees near the river and engaging volunteers to monitor and water trees during their establishment years. Thanks to his leadership, BDHS was twice awarded Town of Caledon Environmental Action Committee’s “Environmentalist of the Year” Award.

In addition to his volunteering at BDHS, Richard has been active in The Bolton North Hill Residents Association, which successfully advocated for the Town of Caledon to purchase and  preserve the mature woodlands on the east side of Humberlea Road.