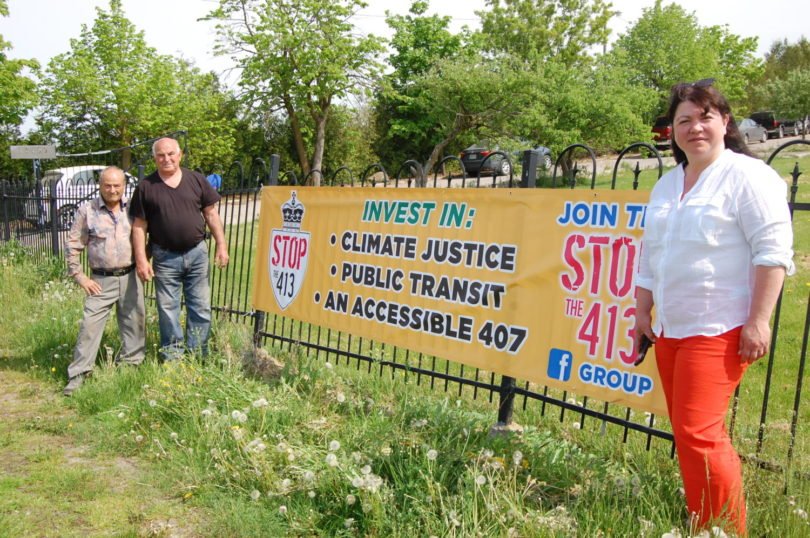 A colourful 12-foot-long vinyl banner on a wrought iron fence on Humber Station Road just north of Mayfield Road is attracting a lot of attention from passing motorists and the not insignificant number of cyclists who bike along that road into Caledon.

This is a banner with a message, as it is urging passersby to get involved in the Stop Highway 413 movement and campaign for climate justice, public transit, and an accessible Highway 407 instead.

Local residents Vince Muia and Mike Colabrese attached the banner on the fence on Muia’s property to express their opposition to the highway. Joining them was Jenni Le Forestier, a member of the Stop Highway 413 Group, an ad hoc collection of volunteers working with Environmental Defence to kill it.

For the two long-time friends and their families, Highway 413 is not a theoretical project. If given the go-ahead, the mega-highway would plow right through their properties and several of their neighbours on Humber Station Road.

“Nothing would compensate for the loss,” said Colabrese, on the heartbreak and devastation their respective families would suffer if their homes are expropriated and they are forced to relocate.

Colabrese and his wife Adele have resided in the same home which he built in the mid-1980s, while Muia and his wife Nina have lived in their house for 30 years.

“It (the highway) doesn’t make sense,” adds Colabrese, citing other alternatives such as widening existing highways—such as is now happening on Mayfield Road—and the introduction of rail service connecting Bolton with downtown Toronto.

“That way people could get into Toronto in 15 minutes instead of driving for two hours.”

A retired factory worker, Colabresse convinced several other Humber Station Road homeowners to erect Stop Highway signs earlier this spring. When approached by this writer about the banner, he readily agreed to find the most suitable place to hang it—which was Muia’s property.

Driving force behind the banner is environmental activist Stacey Mortimer. The former Caledon resident, however, prefers to credit a number of participants in a Stop 413 Group ZOOM call on what measures could be taken to generate high-profile publicity-generating opposition.

“With COVID, we can’t go to Queen’s Park to demonstrate.”

Preliminary design ideas were discussed during the ZOOM meeting and then the suggestions were refined and transformed into a mock up design by a friend who works for a printing company, which then fabricated it. Mortimer paid the printing costs.

Almost as soon as that banner was produced, the core group of volunteers decided a second banner incorporating the Stop 413 Facebook Group logo should also be produced. That’s the one now in front of Vince Muia’s home. It will eventually be relocated to other sites along the proposed Highway 413 corridor, she says.

Now living in downtown Toronto, Mortimer was asked why she is so involved in the Highway 413 fight when she would be nowhere near it.

“You can’t look at this (issue) in bits and pieces. There are no boundaries to environmental protection,” says Mortimer. Fighting for the environment needs to includes indigenous peoples—“the traditional treaty holders,” she adds.

For more information or suggestions on where the banners should be erected, send a message to the Stop 413 Facebook page.