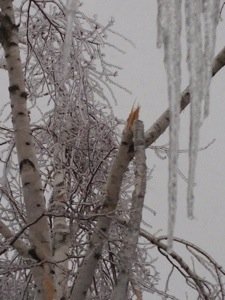 Mayor Marolyn Morrison announced yesterday that a Special Meeting of Council for the Town of Caledon will be held on January 7, 2014 at 2:00 p.m. to address the Town’s ongoing efforts in response to the ice storm, and how the Town moves forward after the initial emergency response.

“Caledon was one of the hardest hit municipalities in Ontario,” said Mayor Morrison. “The ice storm devastated large areas of our community, and we as Council want to ensure everything is being done to help our residents. I would like to acknowledge the continued phenomenal efforts of our staff in response to this unprecedented storm.”

The Special Council meeting follows a December 30, 2013 teleconference with Mayor Morrison, the Mayors of the Cities of Brampton and Mississauga, the Chair of The Region of Peel and the CAO of the Town of Caledon, in which the participants reviewed the impacts of the storm on the Region of Peel and discussed a coordinated response.

Details of the Town of Caledon Response to the Ice Storm to date:

The Town established an Emergency Operations Centre in Town Hall to coordinate Town Departments, gather and disseminate information and liaise with other agencies.
Warming Centres were established at Town Hall, at various Parks and Recreation facilities and subsequently at the Bolton Fire Station.
The Public Works Department cleared major roadways of fallen trees and debris. Work is ongoing to clear Town-owned property.
Caledon Fire and Emergency Services responded to over 240 calls (compared to a normal call volume of 70 for a similar timeframe last year) including eight structural fires. Throughout the storm, Caledon Fire paid visits to local seniors’ residences and residents.
The Communications Department published 19 storm-related news releases, posted dozens of information items on social media, assisted news crews in reporting from the Town, liaised with Hydro One and other agencies to gather and provide information. A permanent website for information on the ice storm has been established and will be updated on a continual basis: www.caledon.ca/icestorm