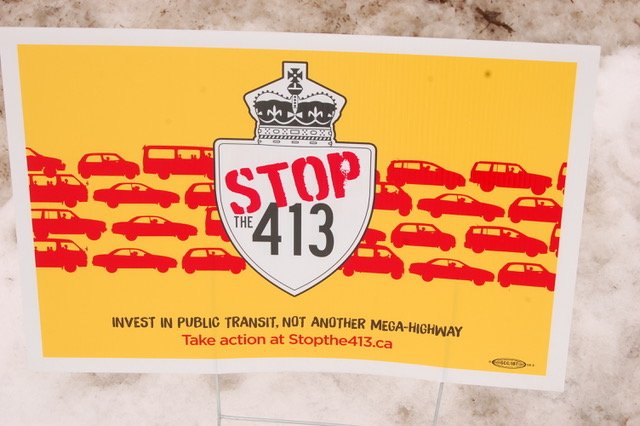 Now that Ontario Premier Doug Ford has doubled down on his support of Highway 413 and made it an election issue, volunteer and environmental groups opposed to the highway are stepping up their efforts to stop it.

As part of a planned second Day of Action sponsored and publicized by Environment Defence Canada, an anti-Highway 413 protest will be held in downtown Bolton at the intersection of King and Queen Streets on Saturday, Nov. 13 starting at 1 pm. Signs will be available or bring your own.

The purpose of the rally/protest is to raise public awareness on the detrimental impacts of this project and to demonstrate to provincial government officials, particularly Dufferin-Caledon MPP Sylvia Jones, that many residents are vehemently opposed to it.

So what’s so bad about Highway 413 and why should Caledon residents be concerned about it? Please consider the following points.

Approximately 400 acres of greenbelt would be lost, as the six-lane mega-highway winds its way from Highway 401 through Caledon to Vaughan. It will have particularly devastating impact on the Nashville Conservation Tract on the east edge of Bolton.

The highway would open up the region to sprawl and the proliferation of even more warehouses in Caledon.

It will cost $6 billion plus and will have no impact on regional congestion. Scarce government dollars would be diverted from public transit initiatives and commuters would be less inclined to use whatever public transit is available. As a result, the highway will eventually become just as congested as any other in the Greater Toronto Area. Drivers will be stuck in traffic and most likely they will also be paying tolls.

Although the provincial government hasn’t said the highway would be a toll road, but it hasn’t denied it either. That is something the trucking industry needs to bear in mind. Apparently, truckers aren’t using Highway 407 to avoid the tolls. So, why would they drive a few kilometres north just to access another toll highway?

The highway’s proposed route is in south Caledon. But this issue is of direct concern to residents in Belfountain, Alton, and Inglewood and other communities in the northwest where the pits and quarries are located. It takes a lot of gravel to construct a highway, especially one of this magnitude. That means more gravel truck traffic in those areas for a very long time, perhaps two to three years, or however long the construction would take to complete. Most likely, there will also be accelerated pressure to enlarge existing pits and quarries and approve new ones.

Consider the real reasons the government is trying to ram this project through. Earlier this year a joint Toronto Star/National Observer investigation revealed that eight of Ontario’s most powerful land developers own thousands of acres of prime real estate near the proposed route and that four of them are connected to Doug Ford’s Progressive Conservative government through party officials and former Tory politicians now acting as registered lobbyists.

For more information on the Nov.13 Day of Action in Bolton contact the writer at: danoreilly@sympatico.ca