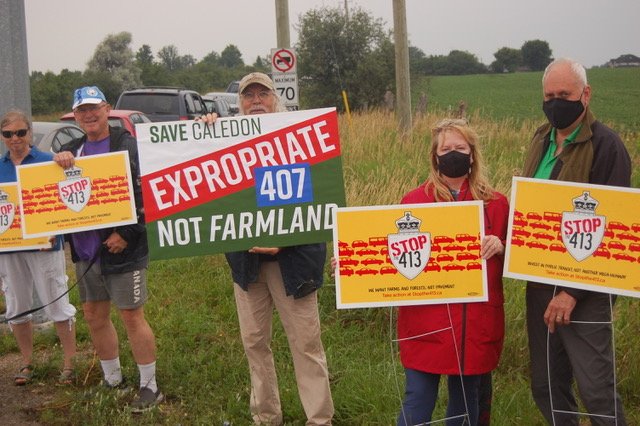 Photo above: (left to right) Janine Le Forestier, John Rutter, Pete Paterson, and Mary and Allan Richardson were among those who participated in the Stop Highway 413 rally at the Gore Road and Healey Road.

Alarmed about the detrimental impact of two proposed mega-highways, volunteer groups and individuals right across a large swath of the Greater Toronto Area took to roads, streets, and sidewalks on Saturday, July 24 in a Day of Action to demonstrate their opposition to the proposed Highway 413 and the Bradford Bypass.

There was also a protest in Caledon as well, which was organized by this writer and Belfountain resident Jenni Le Forestier. 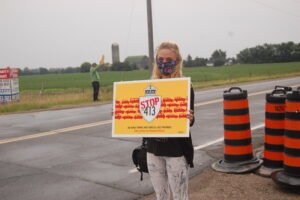 Alexis Wright waved a sign, as well as taking photographs for the Dufferin Caledon Green Party.

Despite short notice and the fact many people are away in the summer, approximately 30 concerned citizens showed up and waved signs at a Stop 413 Caledon rally at the Gore Road/Healey Road intersection. Volunteers quickly grabbed signs and stood at each corner. That intersection was selected as it will be the site of an interchange should the highway proceed.

Attending the event were a number of members of the Green Party and Caledon Councillor Ian Sinclair.

Attracting, for the most part, friendly honks from passing drivers, the protest lasted for about an hour, until cut short by heavy rain. However, one young woman gamely continued to display her sign and stood alone in the rain while waiting for her husband to pick her up.

Environmental Defence supported and publicized the Day of Action to raise public awareness and generate resistance to the highways. However, the protests and rallies were planned by the participating environmental and citizen groups. And there were quite a few events.

In King-Vaughan, the Concerned Citizens of King Township dropped off information packets at a Highway 400 northbound service centre. Stop the 413 activists also handed out flyers in Kleinburg, the Nashville Conservation Tract, the McMichael Art Gallery and other sites in the City of Vaughan. A similar sign wave and information drop also took place at the Orangeville Farmers’ Market. The Sierra Club Peel also staged demonstrations near the Brampton offices of two Conservative MPPs, Prabmeet Sarkaria and Amarjot Sandhu. 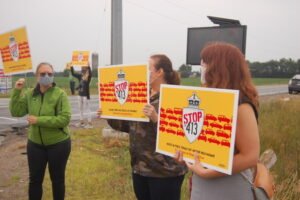 Protesters at the Caledon rally. About 30 people attended the event despite the weather.

If there was a sour note to the day it occurred outside of the Holland Landing office of Ministry of Transportation ministry Caroline Mulroney. The Simcoe County Greenbelt Coalition attempted to hold a rally against the Bradford Bypass outside of her office, but its members were ordered off the plaza by York Regional Police. (The Caledon protest was monitored by the OPP, but there was no interference.)

Other activities included an Oakville Climate Action-sponsored rally in that city and a bike excursion along the length of Highway 413 through Peel Region. Organized by Sustainable Mississauga, the ride was held on Sunday because of the previous day’s heavy rain.

The rationale for the Day of Action was to “show elected officials and those who would like to get elected,” that opposition is steadily mounting against the highways, says Environmental Defence’s programs director, Keith Brooks.

Highway 413 would cross 85 rivers and streams and 400 acres of greenspace, while the Bradford Bypass would cut through the Holland Marsh, some of the best farmland in Ontario, he points out.

Ultimately, the decision on whether Highway 413 goes through rests with the people of Ontario. The provincial election will be held next June and all three opposition parties have promised to kill it, says Brooks.

Asked about follow up programs, Brooks says there will be more Days of Action, especially as COVID-19 restrictions ease, in the future.