Just Sayin’ Caledon thanks the Albion Bolton Historical Society and Bolton resident Valerie Mackie for the following submission and for the photo above from their collection.

On an ordinary day in Bolton during the summer of 2013, something extraordinary happened.  As a demolition crew removed the ceiling of an old home, paper fragments fell from the attic above. On closer inspection, these fragments turned out to be bits and pieces of an old map.  The map did not lead to buried treasure, but the now digitally restored document has turned out to be a treasure in itself.  Here is why.

On June 5th, 1821, British immigrant George Bolton (1799-1868) purchased 200 acres of land along the Humber River, close to what is now the four corners of Bolton, Lot 9, Concession 7 Albion, from Provincial Land Surveyor James Chewett.  George recognized the industrial potential of the river’s water power and immediately began clearing a site on the river’s south bank.  The following spring, with his older brother James Charles Bolton (1781-1840), he started building a small grist mill at what is now the elbow of Mill Street. In operation by 1824, George’s mill was a two storey, gable roofed frame structure with one run of stone, powered by the Humber River.

The mill site gradually attracted other development and the settlement became known as Bolton Mills.  Around 1830, George Bolton provided a log structure for use as a school and, in 1831, built a store at the corner of what is now King and Mill Streets.  The following year, he was appointed the first postmaster of ‘Albion’ Post Office which he housed in his store.  By 1840, the hamlet comprised 15 or 16 log buildings, half of which were houses, some doubling as commercial establishments, and included two blacksmiths, two shoemakers, a tailor, a cooper, a tanner, a distiller, a tavern/inn and Samuel Sterne’s hotel.

In 1845, James Cupper Bolton (1812-1907) bought the mill from his uncle George Bolton. After a major flood destroyed the dam, he moved the mill to a site further downstream, straddling what is now the south end of Humber Lea Road, and expanded the operation into a four-storey structure on a stone foundation.  Other water-powered industries were established on or near the original mill site including a saw mill, steam biscuit factory, planing mill and a cloth factory.  The cottage James Bolton Jr. built to house his workers still stands and is part of the heritage designated Mill Cottage, the oldest residence in Bolton.  Meanwhile, in 1846, his brother Charles Bolton (1804-1863) received the patent for the 200-acre Clergy Reserve in the southeast quadrant of Bolton, Lot 8 Concession 7 Albion, and lost no time in subdividing it into ¼ acre village lots.  Those lots along King Street East now form Bolton’s oldest residential neighbourhood.  By 1850, as the demand for flour continued to grow, James again doubled the size of the grist mill.  The village growth was almost explosive.

To document the growth, T. C. Prosser, a local land surveyor, was hired to survey the village, document existing lots and lay out new town lots on vacant land.  The paper fragments that fell out of the attic are pieces of his 1854 survey map, seemingly the only copy in existence. The map shows numbered lots and highlights existing buildings, some with the owner’s name. 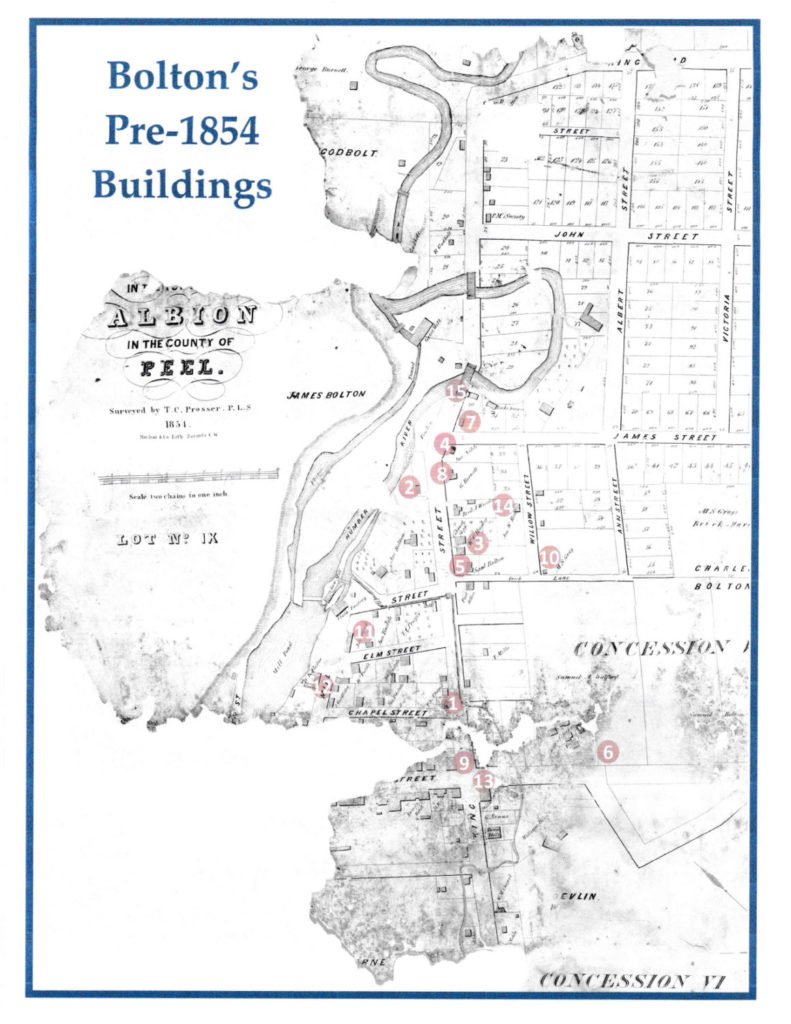 Prosser’s map has helped us confirm that 15 buildings still existing in Bolton’s core were built prior to 1854.  Ironically, the 16th would have been Charles Bolton’s c.1836 vertical plank home, where the map was found during its demolition.  Two others, demolished recently, would have included 49 King Street East (originally T.C. Prosser’s House, better known as Jaffary’s House) and 24 Elm Street (John and Martha Tindale’s home). 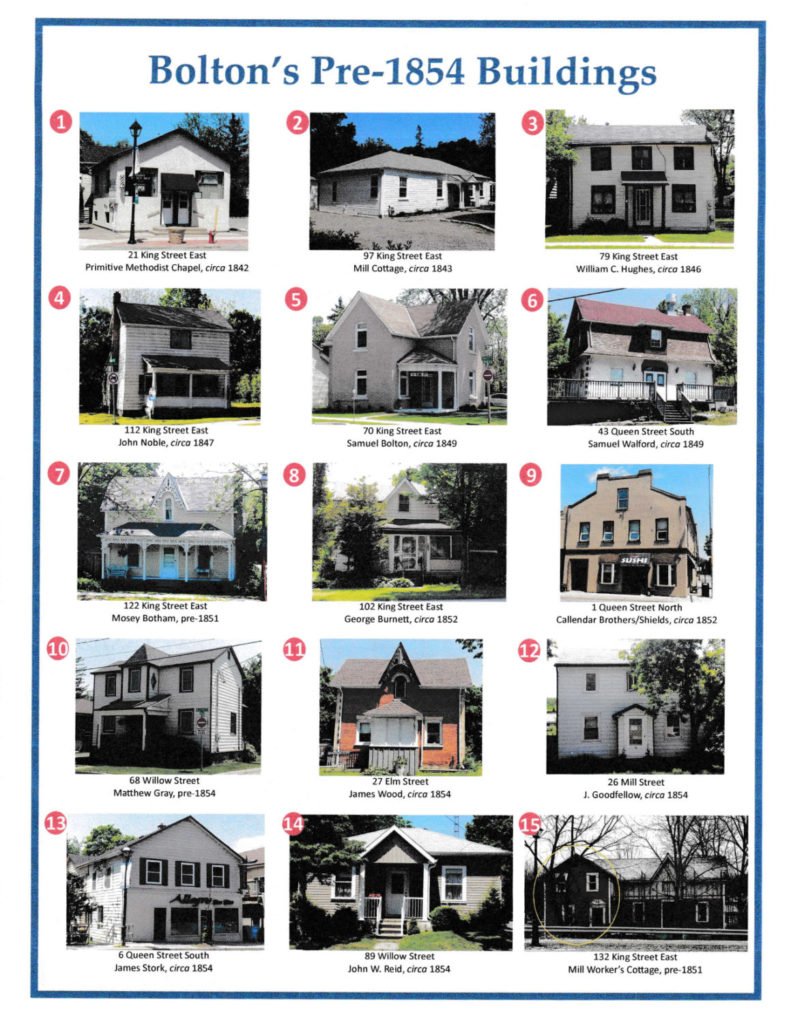 Bolton is nestled in the Humber River valley on land that has been occupied and used by Indigenous peoples for millennia, including the Huron-Wendat, and the Haudenosaunee peoples. It is the treaty and territorial land of the Mississaugas of the Credit First Nation having been acquired from them by the British Crown through the Ajetance Purchase (Treaty 19) in October, 1818.  In 1819, the area was surveyed as part of Albion Township by James Chewett, who was given 2,635 acres in the township as payment for his services.  On June 5, 1821, Chewett sold a 200-acre lot in the Humber River valley to British immigrant George Bolton.