On July 10 the Town of Caledon and the local equestrian community celebrated the two-year countdown to the TORONTO 2015 Pan American Games.

The Town will be hosting the dressage and show jumping components of the Games at the Caledon Pan Am Equestrian Park in 2015.

Activities at the countdown event included a Pan Am flag presentation, mural unveiling and an equestrian demonstration by Olympian and 2003 Pan Am Games medalist Jacqueline Brooks. 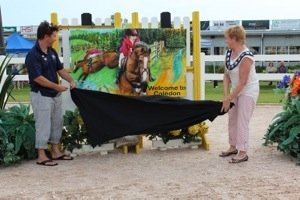 Local artist David Arrigo presents Mayor Marolyn Morrison the painting created for Caledon, representing the rolling hills and the centre of equestrian sport in the Province. Each municipality participating in the games received a mural that will reside in the community as part of the two-year countdown events.