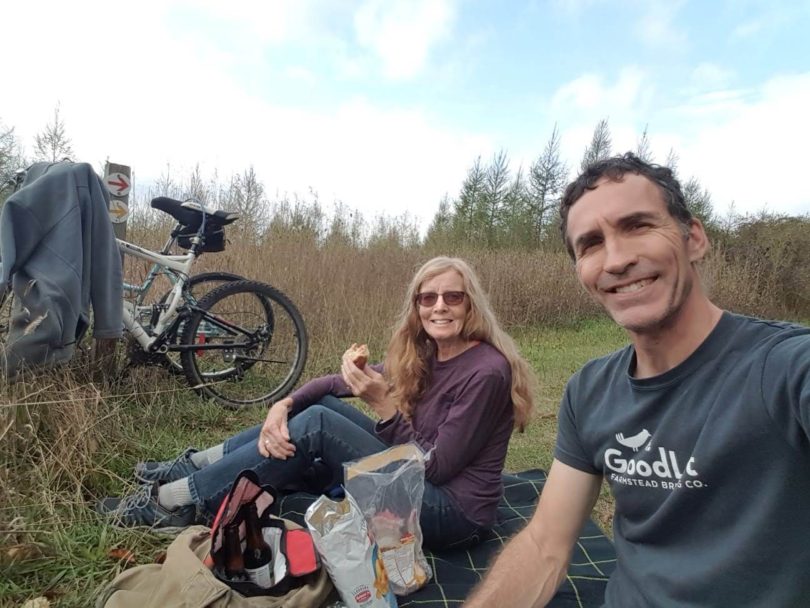 Recently I read that Helen Keller, near the end of her career, was asked by a student if there was anything worse than losing her sight.  She replied, “Yes, I could have lost my vision.”

To be a visionary is to not only resist complaining about how things are and imagine how they could be, but to actually pioneer the steps to change them to what they could be.  Palgrave’s Barb Imrie is one of those rare individuals.  And it turns out that her husband Russell is beside her all the way.

“We have to have the same values,” she explains, “to model and demonstrate them for our kids.” 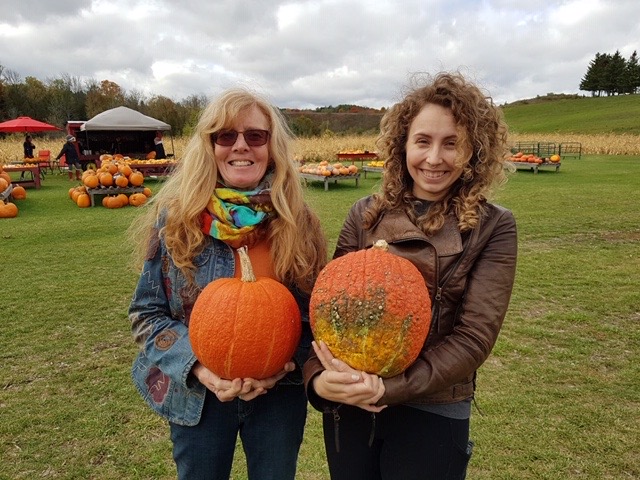 Barb with her daughter Bea at Albion Hills Community Farm

Barb and Russell knew each other from childhood but started dating in their late 20s.  They married and had 3 babies close together.  Important decisions had to be made.  Where would they live? How would they live?

Russell is a geophysicist so his job takes him out of the area.  Barb, on the other hand, was an outdoor education specialist employed by the Toronto School Board (TDSB).  She chose to teach in the Board’s field centre located in the Albion Hills Conservation Area.  That way she could work where she lived.  No long commutes for this climate leader who has always been ahead of the curve.  Remember, this was back in the 80s.  She explains that the commute time saved she could put into volunteering!

The couple found a rental house by a pond on the Gore Rd that they called ‘the cottage’.

“We had a local piece of the woods for playing – skiing or canoeing with the kids,” she smiles. (They rented for 25 years before finding their dream home in Palgrave village.)

The Etobicoke Outdoor Education Centre overnight program required Barb to do 24-hour shifts away from home, while back home dad was chief cook and on-duty parent.

“We’ve been thrifting all our married life,” she continues. “Thrifting?”  I ask.

“That’s what we do,” she says simply. “I’m an eco-system thinker.  I teach ecological literacy.”

And she wears many hats.  At the 2007 Palgrave United Church’s AGM the United Church Women’s group (UCW) declared that they would no longer be offering the Church’s annual Turkey Supper to the community.  It was too much work; they were aging, etc.   In response, Barb, Russell, and a few more stepped forward offering to take on the project.  The Turkey Task Force was born!

Of course, with Barb and Russ on the team the strictest eco principles were followed. Turkeys, produce, dairy etc were sourced within 10k and local growers were fairly paid for delivering – an investment in the local economy.  No disposable dinnerware was used.  Dishes were washed by hand. Waste was composted.

500 dinners were served that night and the gig became know as The Feeding of the 500.  The Turkey Task Force was recognized by In The Hills magazine as local food heroes.

And it was the start of something big.

The need for a dishwasher in the Church kitchen was obvious, but, said our visionary, it must be a ‘commercial’ dishwasher, because then the Church could boast a ‘certified commercial kitchen’, which could be rented out to groups for preparing foods to sell.

This dream became a reality with funds from the Church, the UCW and the Town of Caledon Green Fund. Note: the word ‘fund’ implies that someone works on completing a grant application – tedious and time consuming.  Barb was always up for this because in her words: ‘I don’t mind investing the time to manage and organize.  I’d rather get things off the ground and going.”

Palgrave Rotary, Region of Peel’s United Way (petitioned by Barb’s due diligence) all kicked in funds and The Palgrave Community Kitchen had its Grand Opening in 2009, and just celebrated its 10th anniversary this past November.  It boasts a 9 member Kitchen Committee that organizes fresh lunches for schools, engages volunteers and rents out the space to fill Church coffers.

Together they are creating a community hub that models, “Enough for all forever.  Not just for next week.”

Pushing for more, Imrie suggested that the church roof was the perfect pitch and angle for solar panels.  But that was vetoed as beyond affordability.  The Environment Committee agreed to fund Bullfrog Power instead. A move to a lighter footprint for sure, but Barb and Russ were still pushing for solar.  When the church manse was sold the money was invested in GICs making around 1 to 2%.  Barb pointed out that the Ontario government’s FIT program would yield 12% were they to install solar panels.  The United Church of Canada Foundation provided interest free loans to environmental upgrades to the building and voila!  Solar panels were installed in 2013 and Palgrave UC had a 20 year FIT contract,

Humber College’s Sustainable Energy and Building Technology course third year has a date this semester to assess the Church for a carbon neutral designation.

And in this era of closing churches, the Community Kitchen and solar panels are keeping Palgrave United Church afloat.

Now go back to 2011.  The Church kitchen is looking for a community garden project and at the same time, Karen Hutchinson (Eat Local Caledon/ Caledon Countryside Alliance) is looking to create a local food system demo farm.  As well TRCA was requesting proposals to rent land in the Albion Hills Conservation Area.  The stars aligned. Barb and Karen’s proposal was accepted.

The Albion Hills Community Farm was born, with a five-year lease on the land. It was the first community farm in Ontario.

In the first 4 years Barb and Russ planted a 100 ft.- row of garlic in their community plot and then gave it back to the farm.  Now organically grown garlic is one of the farm’s signature crops, and Barb has named Russell ‘the garlic guardian’.

The children are grown now and mostly flown, with a new grandbaby coming soon, but the Imries still walk their talk.  It’s part of who they are.  She was awarded Caledon’s 2009 Environmentalist of the Year.  And for my money, still outdoes most of us aiming for a lighter carbon footprint.

The family has a memo in their kitchen: Don’t judge each day by the harvest you reap but by the seeds you sow.

And Barb’s last words to me were: first reduce, then reuse, then recycle.

Words to live by.

Kathryn (Kay) MacDuffee thinks of herself as a learner/teacher/seeker after truth.  She’s lived in Caledon before it was Caledon. A retired educator and journalist, her brimming energy keeps her active still in both. Her secret? An attitude of gratitude.