Sitting across the desk from Joshua Stern I am reminded, for a few brief moments, of a Harry Potter scene where Fawkes, Dumbledore’s Phoenix, was reborn from ashes after bursting into flames. For many of us life is a journey with a few ups and downs but Josh Stern has had to fight his way back from a very dark place.

Turning back the clock to 2010, he had tears stinging my eyes with a tale about being bullied in school, a broken relationship with his son’s mother, job loss, drug abuse and the death of his mom. Yet rising from those ashes came this compassionate, determined young man who is the force behind The Josh Project and Marion’s Place.

“The bottom was the night my ex left with our son”, he admits, “I was extremely distraught. There’s no other word. I had never, even after all that had happened, ever considered suicide. But I found myself sitting, empty in a chair, and wondering whether the easiest and best thing would be if I just shut my eyes and never opened them again.”

“Suddenly it was as though 2 voices were battling in my head and one was daring me to swallow a bunch of pills. Then there I was, in the bathroom, and I had dumped an entire bottle of pills into my hand. I stared at myself in the mirror and tears started streaming down my face as I thought about my son.”

What happened next could have been a hallucination, a spiritual experience, or a dream, depending on how you view life. The label doesn’t matter. Josh says he prefers people define it in whatever way they feel comfortable. What matters was the outcome.

Josh describes it as a sudden jolt. “It was as if someone struck my hand; and the pills flew all over the floor. I turned expecting to find someone but no one was there. And then I heard my mom…”

That moment led him from the darkest of places back to light and hope and onto the path he believes he was meant to be on. Josh shared a copy of “mom’s list” with his father and his brother and “assured them I wasn’t crazy” he laughs. He gave up on a book, a work of fiction, that he had started writing and, instead, wrote the story of his life. Everything. In just 4 weeks.

Then he flew to Arizona and “locked myself in a room to type it up”. When asked why Arizona he says “it is one of the few places in my memory that is a safe and happy place. My grandfather who did well financially late in life bought 3 homes there. He rented out 2 and lived in the other for three quarters of the year. So every Christmas and March Break for 10 years we would all go to Arizona. And it was fun and I was happy there. I didn’t have a lot of those types of memories in my life. So where better to go to finish the book?”

That book went on to gain acceptance and soon Josh had an offer from Youth Assisting Youth to come out to speak to kids, work with youth and eventually became YAY’s spokesperson. 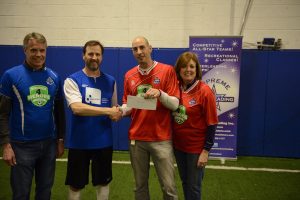 One day Josh found himself drawn to a story about The Jack Project. The son of the charity’s founder Eric Windeler had tragically committed suicide in his first year at university. At that time Josh was troubled by a video he saw on the organization’s website that claimed that 1 kid in every 4 in Canada has mental illness. “To say 1 in every 4 kids had schizophrenia or bipolar disorder seemed like the wrong message to sending out to our youth in my opinion”, says Josh. “To me that’s a dangerous statistic to be promoting in our schools. And if you are calling anxiety and depression a mental illness I have a problem with that”.

“I feel that everyone, of any age, needs to see a professional if they aren’t feeling well, physically or emotionally. But also sometimes you just need to talk things out with someone, like a friend or a trusted adult. I believe there are ways that we can solve things without giving someone the label of mentally ill if that’s not actually what the issue is” says Josh. “And so I decided to start The Josh Project”.

The Josh Project is dedicated to positively impacting as many of today’s youth as possible, aiming to combat the issues that lead to a child becoming at-risk to begin with. The Project supports new and existing anti-bullying and other programs in schools all across Ontario. “Experience plus understanding equals mentors. Care plus education equals no bullies,” he smiles.

The organization also hosts fundraisers like Hockey 4 Heroes and Soccer 4 Heroes. “We teach kids that you don’t have to have a cape or laser-beam eyes to be a hero!”

“Then there’s the Tasha series of books that deals with bullying, lying, stealing, anything that a young person might find themselves faced with during their school years, told through the eyes of a dog Tasha. After all, kids find dogs far more engaging than people” he laughs.

Josh has a dream to build Marion’s Place, a youth centre, named after his mom, on 6-1/2 acres of donated land in Caledon East. “Local support would mean everything for this – donations, building materials, volunteers, fundraisers…”

Read about the vision for Marion’s Place and how you could help at TheJoshProject.com/marions-place