In a way talking with Andrew Yorke, on a chilly February evening, was like talking with any ordinary young man. We talked of hopes and dreams and friendship and family. But we also talked about challenges and pain and mental focus and solitude, not so ordinary for someone so young.

At 26 Andrew Yorke has a sense of self that is anything but typical for his years. Having defeated wars waged by his own body, including a potentially life-threatening bacterial infection in his spine, stress fractures and a broken leg, this well-known Caledon triathlete is completely focused. And he is full speed ahead down the road to the 2016 Summer Olympics in Rio.

Having moved to Caledon East from Brampton with his family when he was 6 Andrew spent his youth enjoying Caledon’s trails to their full potential. By the time he was 12 he was averaging 20 km a day on his bike “just because I wanted to”. By age 15 that mileage grew to 40 km plus. That was the year he really started to train. And train he did. With the Barrie Shepley and C3 Triathlon Club. And with the Dorado Stars. In fact over the years Andrew has biked, swam, skied, ran and participated in track and field.

The accomplished triathlete credits much of who he is to having been raised in Caledon. “I loved growing up here. I loved the hills and being able to bike them, and run them. There was always a challenge right outside my door. Caledon gave me such a sense of freedom and exploration.”

Andrew also speaks appreciatively of his huge support network. “I have a great, great network; my family, my girlfriend, my friends, they are always there for me”.

Indeed the young man lives in a world where there are “a lot of people around, so much of the time”. He has come to truly value his alone time and understands it has to be part of his regimen. “So much of what I do is inside my own head”, he explains. “Relaxation and quiet time are really important, to just really shut off, so I can focus, and be able to draw on what I need to do, when I need to do it”.

I ask what is the hardest thing he has ever done. “To come back from injuries” is the quick response. “It’s hard to focus on doing your best when your body won’t let you. It’s tough to be patient and wait it out. You feel cut-off and isolated when you can’t keep up your normal work-out routine”. 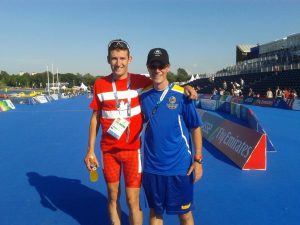 I summon the courage to ask him one of my most difficult questions, “Do you have any regrets”? There is no hesitation. “No, not really. I feel like I put everything into this, right or wrong, with a goal of being the best I can be. Everything I have done since age 15 has been driving me towards this goal. Maybe I could have done some things better, but really when you think about it, everything I have done is what has led me to here”.

With sights set on the Pan Am Games and the 2016 Olympics Andrew currently trains at the Regional Triathlon Centre (RTC) in Guelph with Head Coach Craig Taylor. Qualifying races have him travelling again to places like Abu Dhabi, New Zealand and Japan. And some of that great support network back here in Caledon has planned a fundraiser to keep him on that Road to Rio.

Asked when he knew that this is what he wanted to do with his life Andrew is again very clear. “I always knew I wanted to be an athlete. I always wanted to excel. I love the feeling of working hard and accomplishing a goal because of it”.

Want to help Andrew on the Road to Rio?