A message from Sara, the Town of Caledon’s Manager of Energy and Environment about the Let Your Green Show campaign……

How can residents participate?

What is the Let Your Green Show campaign?

The Region of Peel, cities of Brampton and Mississauga, Town of Caledon, Credit Valley Conservation and Toronto and Region Conservation Authority, collaborated to bring you the Let Your Green Show (LYGS) campaign. LYGS is a community awareness campaign that helps to implement the Peel Climate Change Strategy. It is targeted at Peel residents and is intended to engage them in “green” activities to reduce their environmental impact.

LYGS consists of 3 phases. Phase 1 and 2 occurred in 2012 and 2013. Phase 3 asks Peel residents to give their cars a break from May to October and its primary focus is through social media. A greenback contest with monthly prizes runs through to September 30, 2014. The campaign ends on October 31, 2014 with the announcement of the greenest resident award for each area municipality. (Please note, the contest is only open to Peel residents.) 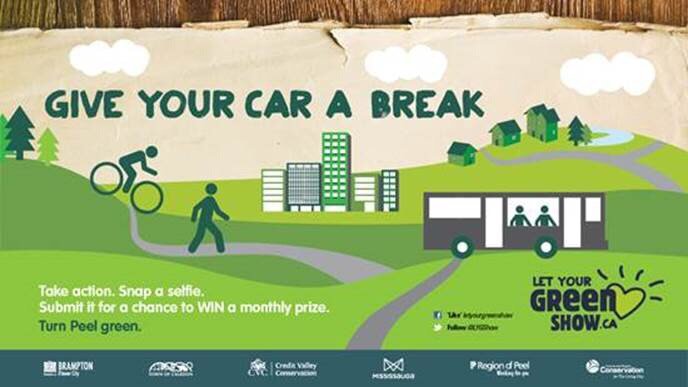