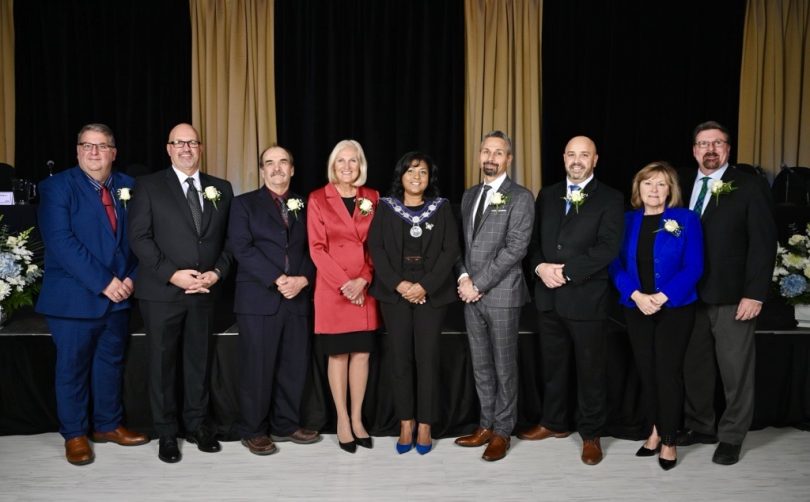 The Caledon East Community centre was packed on Tuesday night for the Inaugural of the Town of Caledon’s new Council for the next four years. The full house of family, friends, interested citizens and media stood in respect as the newly elected Mayor and Councillors were piped into the hall.

A full regalia of flag bearers escorted the group up to the head table, where Town Clerk Laura Hall acted as the Master of Ceremonies. Ms. Hall welcomed the crowd with Caledon’s Land Acknowledgement to our First Nations, a reminder of the promises renewed with the 2018 restoration of the wampum belt.

Sope Duyile, a Robert F. Hall student, led off with a beautiful rendition of O Canada. Sope was followed by Reverend Maria Brown-Lawrence, whose blessing for Council touched on themes of diversity, the pursuit of freedom, justice and truth, and a recognition that we are living in times of evolution and revival.

Each member of Council, beginning with the new Mayor, placed a hand on a bible, then made their Declaration of Office.

When all the Council members had taken their oath, Mayor Groves was introduced to the audience by Sara Clarkson, a proud 4th generation Caledonian. Her message to the new Mayor and  Caledon Council was clear: “Always represent us because this is our home. Please work together for us.”

Mayor Groves followed by thanking her god, her family, her son Tyler and her team for the support they had given her during the campaign. She declared that she was ready to lead with integrity in the best interests of all citizens in Caledon for the betterment of the Town. She recognized that these will be four challenging years dealing with a reduced presence at Peel Region, growth, aggregates, trucking and road safety, traffic calming, and the finalization of the Official Plan to protect our quality of life. She vowed to conduct herself with complete transparency, and to renew trust in her role on Council.

Mayor Groves drew a loud ovation when she declared that she would unlock the doors at Town Hall which were shuttered during the height of the first pandemic, help small businesses grow the economy, and put building permits on a fast track.

She vowed to end  divisiveness, stating “No community will be left behind.” She declared that the Town of Caledon will become “the Crown Jewel of the GTA!”  The Mayor closed with a quote from Nelson Mandela: “What counts in life is not that we lived, but the difference we have made in the lives of others.”

When the Mayor was finished, the microphone was then passed to each Councillor in turn who all thanked family, friends, and their teams for support during the campaigns. Newly elected Wards 4-5-6 Regional Councillor Mario Russo, pledged “to listen and to be our voice” at Peel Region.

Cosimo Napoli, Councillor for the new Ward 6, promised to work in a “positive and prosperous direction.” Councillor Tony Rosa Ward 5, gave an emotional thank you to his late father and promised to “do my best.”

Councillor Christina Early, Regional Councillor for Wards 1-2-3, enthusiastically thanked her “village people” stating that, “I take your trust seriously.” Newly elected Councillor Doug Maskell, Councillor Ward 3, told the crowd he wondered, “What am I going to do after retiring from teaching?” He thanked his family for their support in his decision to run for office. Dave Sheen, Councillor Ward 2, gave an emotional thank you to his family and Town staff, stating, “ I am excited to take on this new role.”

A memorable anecdote was given by re-elected Ward 1 Councillor Lynn Kiernan that this event was “like a New Year’s Eve party, and that the work for the New Year starts tomorrow.” And Nick DeBoer, re-elected in Ward 4 gave a brief and practical “time to get to work” as only a Caledon farmer knows.

The evening closed with the new Council again being piped out of the room and into an awaiting banquet.

Promises of inclusion, respect, transparency, and trust filled the hall. As with any new endeavour expectations are high.

After every election cycle there is always a certain amount of reconciliation that is necessary. It is important to remember that before reconciliation comes truth. The speeches  have been made. Time will tell. As a young Severn Suzuki told the Rio 1992 attendees, “You are what you do, not what you say. Please make your actions reflect your words.”

Our new Town of Caledon Council has taken their oaths, made their public pledges. The next four years will determine the truth of their words.