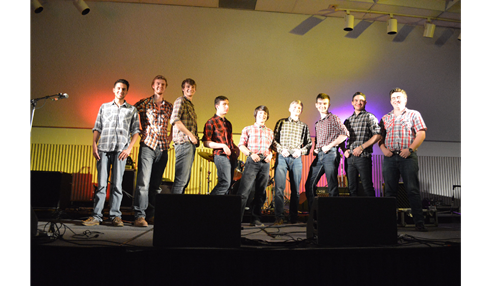 Competition was fierce at this year’s Battle of the Bands, which took place on Friday night at Caledon Community Complex.

Five bands competed but it was I Done Lost My Tractor Again (pictured here) that stole the show and won the competition. The band, consisting of nine members (Zachary Clifford, Matt Boettger, Andrew Boettger, Eric Deare, Julian Faita, Albert Stancescu, Mitch Greenham, Matt Vainer, and Matt Reynolds) have won a spot on the main stage at Caledon Day and a special meet-and-greet with headliner Chad Brownlee.

Kudos is extended to all bands who competed, including: ANZCHANNEL, 20/20, LOAF, and SharkBark.

Caledon Day is taking place on Saturday, June 18 at the Town Hall Civic Campus, 6311 Old Church Road in Caledon East from 2 p.m. to 11 p.m. This year’s theme is Caledon Day Gone Country and the headliner is Canadian Country superstar Chad Brownlee. Admission is free. Enjoy the Beer Zone, the Car and Motorcycle Zone, the Kid Zone, mechanical bull rides and so much more.