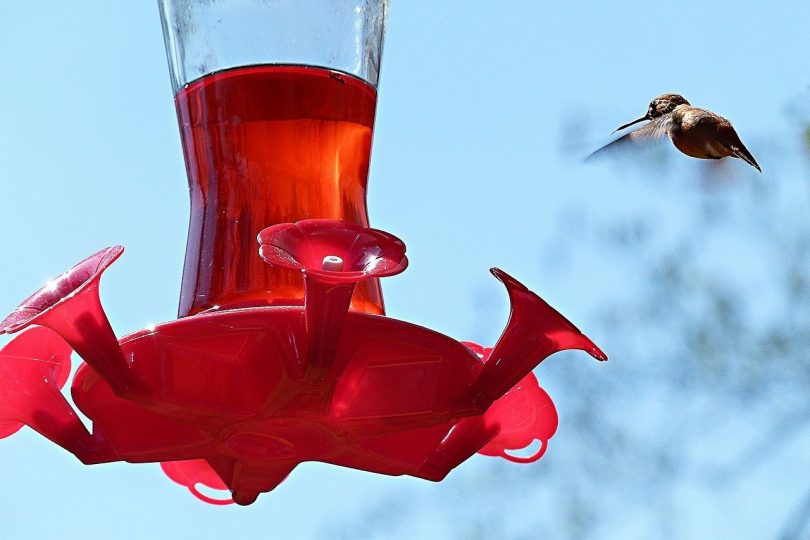 Hummingbirds are the smallest birds in the world, weighing in at only about 4 grams, but they may have to gain another 4 grams before they head off in their migration to warmer countries like Mexico and the Central American Countries. Their wings flap 50 to 200 times per second, enabling them to instantly change their directions in flight, or to fly even upside down, and to hover in front of flowers and feeders.

Their amazing flight speed is between almost 50 to 100 mph. One can easily state that Hummingbirds live in a Micro-World. 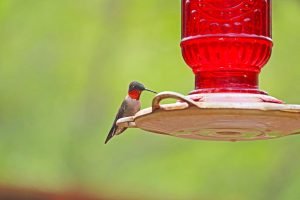 In eastern Canada only the Red-throated Hummingbird is present. Canada has a total of five species, with several more occurring accidentally. The Rufous Hummingbird, which nests in northwest Alaska and Canada, migrates about 5,000 km; the Ruby-throated Hummingbird of eastern Canada travels more than 3,000 km, including a stretch of more than 800km across the Gulf of Mexico to their wintering grounds in Mexico and the central American countries.

Hummingbirds are not peaceful creatures. They establish their territories and defend them viciously, sometimes even attacking much larger birds. Their sounds are deep-throated and guttural, with chirps, squeaks and twitters. Their nests are delicately woven out of plant fibres, plant down, even spider webs. Their eggs are only 1.25 cm, the smallest of all bird eggs.

With a brain only occupying 4% of its body size, Hummingbirds have an amazing memory, remembering the best locations where to find food for years after. Their life span is 3 to 5 years.

Hummingbirds never pause during their search for food. They eat every 10 minutes, so if one or more of them choose your feeder as their favourite, you are rewarded many times with their presence. They must consume about ½ of their weight in sugar daily, visiting as many as 1,000 flowers a day in order to keep up their amazing tempo of life. During the night they go into a suspended state called torpor, during which their metabolic rate is only one fifteenth that of normal sleep.

Rule one is that the feeder must be easy to open and clean. That should be done with a bottle brush kept especially for that purpose, not with the same one that is used for your dishes, to prevent food matter from being transferred, and the resulting possibility of contamination by bacteria, fungi and other harmful organisms.

A good feeder should have red parts because the flowers pollinated by Hummingbirds are often red. Most feeders come with plastic bee guards fitted over the feeding ports. If these are yellow (like in most commercial models) they may attract yellowjacket wasps and bees, which also dine on nectar. Some feeders have “ant moats”, which can be filled with water to discourage ants, and perhaps even provide drinking water for the birds.

Think of having several small feeders instead of one large one. I personally do not follow that rule, but larger feeders require more maintenance against solid sugar formation or because of evaporation.

Your best bet is the commercially available powdered food which has only to be mixed with water. For a feeder with red glass or lots of red on it, you can use the white powder. From personal experience I have found that Hummingbirds react negatively to the fluid in a colourless feeder. They simply do not visit it. I use white fluid in my red glass feeder on my front patio, and red fluid in my white glass feeder on my back patio.

You can mix the powdered food, or also buy white or colored pre-mixed fluid. Canadian Tire has a great selection of all types of feeders and foods for Hummingbirds. You can also mix it from regular sugar, which contains about the same chemical ingredients as the commercial brands.