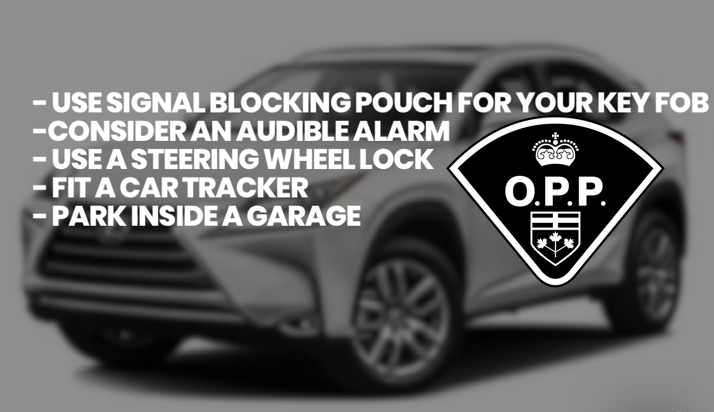 The Caledon Detachment of the Ontario Provincial Police would like to inform the local residents about targeted car thefts involving Lexus Sport Utility Vehicles (SUV). In the last week, officers responded to three reports of Lexus SUVs and one Toyota SUV being stolen from residential driveways in the Southfields neighbourhood in the Town of Caledon.

• In the second occurrence, the vehicle was stolen from Gentle Fox Drive on June 29, at approximately 1:35 a.m.

In all four instances, the vehicles were locked and all key fobs were accounted for.

• Make sure your car keys are kept well away from doors and windows;

• Use signal blocking pouch – they can block your car key fob from transmitting its code to the vehicle, as the pouch is lined with layers or metallic material;

• Turn off keyless fob wireless signal at night – refer to your car manual for instructions;

• Use a steering wheel lock or car alarm – this could significantly delay or discourage the thief;

• Consider an audible car alarm – which works by using sensors placed in different points of your vehicle;

• Fit a car tracker – unusual activity is monitored and car can be followed through GPS if stolen, and most importantly;

• Park inside a garage is possible;

• Always lock your car, never leave it running and unattended, and remove all valuables from plain view.

It is suspected that a security camera jamming device was used by the suspects. Wireless security cameras are the easiest to jam by using a signal jammer to send a stronger signal that uses the same radio frequency as the wireless cameras, while wired cameras can be jammed by interfering with the wires and the security equipment.

Hybrid security systems are preferred: if somebody tried to jam the signal, the camera would automatically trigger the alarm by sending the signal over the wire. And if the wire was cut, then the signal would be sent wirelessly. A cellular coverage adds another extra layer of protection.