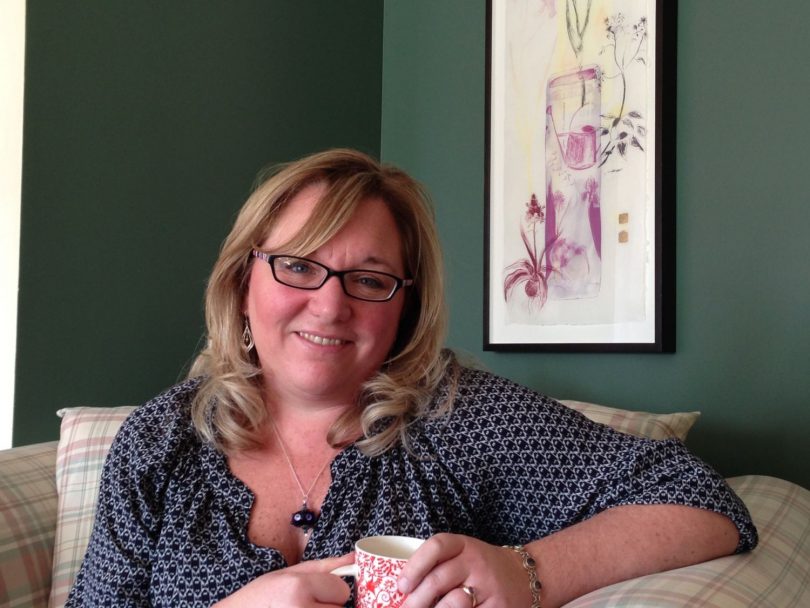 The lady herself is as welcoming and sunny as the room she has invited me into this bright winter morning. The first thing you notice about Bolton resident Laura Brady is her broad genuine smile and her gracious demeanour. Before long you also realize that this is a smart, business savvy woman, proven and well-respected in her field, with a creative and entrepreneurial drive that shines throughout the conversation.

Raised in a tiny town called Cottam, near Windsor in Essex County, Laura remembers her first job as a young teen as a corn detasseler. “I think I stayed with that for 3 days” she laughs. “It was one tough job, especially in the heat. But still I’m glad I tried it; it’s good to know how these things happen and it gives you an appreciation for the folks who do that work”. Laura’s father was an auto worker and hobby farmer and growing up on a small acreage that was home to the “community pond” meant lots of friends, freedom and fun. The creative and adventurous qualities she developed would serve her well later in life.

Following Grad School Laura moved to Toronto and went to work as a typesetter at McClelland & Stewart. Her first year at the large Canadian publishing house rewarded her with opportunities to meet Pierre Trudeau, Robertson Davies, Margaret Atwood, and Leonard Cohen. “It was like I had died and gone to heaven; it was just amazing” she beams.

Laura and her husband Ron, a literary agent, met while working at Penguin Books. In 2001 the couple felt ready to purchase their first home and set their eyes on Bolton. It was affordable compared to Toronto and central as although Laura was working from home Ron was commuting to Richmond Hill at the time. “And we’ve stayed because we feel very settled here and we like the community a lot”.

Passionate about her work as a freelance book designer Laura proved herself to be adaptable and adventurous when in 2008 the market started to dry up. The first e-readers had been introduced around 2007 and the publishing world was changing. Laura responded by launching herself down the road to what is today a very successful career in e-book development.

And it was quite the learning curve as programming and coding had to be added to her skill mix.

“In the early years we would use Twitter to commiserate and collaborate with people all over the world trying to make their way and figure it out. One of my closest colleagues to this day is someone in New Orleans.” Laura’s career has very much evolved and she is now sought out, in the field, to lead custom training workshops for people who need to learn to make e-books.

“It’s a brand new world; I love it and the travel”, she smiles. Work has taken her to San Francisco, New York, Chicago and Vancouver. In New York she picked up a Digital Book Award for an e-book she developed entitled Virginia Wolf. This year she’ll be heading out to Denver and Nashville among other places. “I really enjoy the conferences and the opportunity to socialize with people doing the same type of work. I love being with my community of nerds”, she adds.

Back on the home front Laura talks proudly about her husband Ron, and sons Joey and Griffin. Ten-year old Joey loves baseball and is an enthusiastic member of the Bolton Braves, playing on their Select Team in his division. Fourteen-year old Griffin is that fabulous drummer in Eternal Red, a local band you may have seen at Caledon Day and other local venues.

Asked about her idea of a perfect day Laura smiles again, “A long bike ride, dinner with my family and some time to read a good book”.