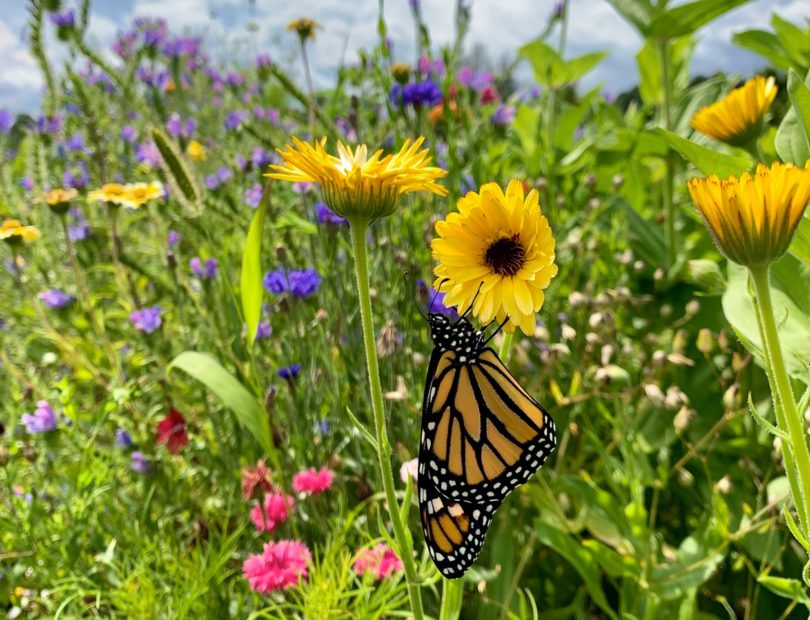 The Albion Hills Community Farm (AHCF) officially became a Monarch Butterfly Waystation and certified to raise Monarchs in 2019. But the year before, thanks largely to the ministrations of Hayley Cunneyworth, the miracle of the Monarch migrations officially captivated the Farm community. 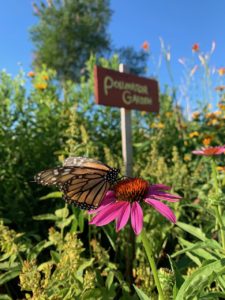 Hayley began her work at AHCF as a summer student with the federal Canada Summer Jobs youth grant. She proved herself to be a hard worker, self-motivated, and environmentally literate in her care for the land and its creatures. Karen Hutchinson, the AHCF manager, says of Hayley, “She arrived at the farm keen and eager to learn about farming on a cold day in March 2018 and she stayed each summer as she completed her degree in Environmental Science at Queens University. During that time, Hayley worked hard and always gave so much of herself while learning to be a farmer. She left us with a lasting legacy of her passion for Monarchs and growing food, especially how we can do both at the same time successfully. As an environmental scientist and a farmer, Hayley gives me great hope for the planet as the next generation takes over its care.”

But it was a chance encounter that led to Hayley’s love of the Monarchs. She was observing one of the Toronto and Region CYC (Conservation Youth Corp) staff working with a group of students on site as they examined some milkweed leaves in the fields. Hayley joined in as the instructor turned over a leaf and pointed out the tiny white football shaped egg on the bottom of a leaf.

“It was the first time I had seen a Monarch Butterfly egg. It was so small – I must have walked past a thousand milkweeds and had no idea where to look for them” recalls Hayley. 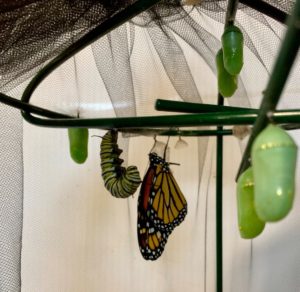 Now, with a trained eye, Hayley began to scour the fields and found more Monarch eggs. She started at home turning her brother’s old gecko terrarium into a Monarch habitat. Based on that success, she assembled a variety of containers in the AHCF office and placed in several milkweed leaves with Monarch eggs. That was the beginning of an amazing journey for all of us.

I was the AHCF “Chicken Whisperer” at the time and frequently stopped by our office. By the next time I had wandered inside, I discovered a veritable Monarch nursery. Hayley now had them in various enclosures in all states. She showed me the tiny white caterpillar that first emerged from the egg no bigger than a miniscule piece of sewing thread. “The first time I saw that,” Hayley said, “It just blew my mind.” They grew quickly, voraciously eating a lot of fresh milkweed leaves and soon the classic yellow and black stripes began to appear on the white caterpillars.

The next time I visited the office, she had full size caterpillars, caterpillars that were spinning their chrysalides, and soon … emerging butterflies. It was a full lesson in the life cycle of one of nature’s most amazing creatures. When I asked Hayley what fascinated her most about the Monarchs, she said, “Everything. Mostly the incredible migration they take, with four generations of caterpillars and butterflies making the journey south and north again. In the summer we see the great-great-great grandchildren of the butterflies that migrate south in the fall. That simply amazed me.”

That passion led to several of the AHCF staff becoming certified as Citizen Scientists through the Monarch Teacher Network of Canada and Journey North. Working with TRCA instructors we learned about the different types of milkweed and how to identify them, building Monarch nurseries and butterfly enclosures, and tagging mature butterflies for release. 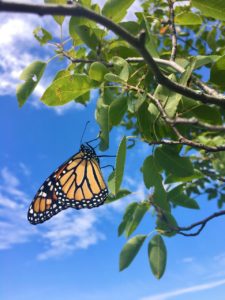 We had discovered that despite our good intentions for raising and releasing Monarchs, because of their “species of concern” status, Ontario law requires an Ontario government permit is required to raise more than one Monarch Butterfly at a time. Once Hayley and crew had their certification completed, they were ready to raise and release. AHCF became a Monarch Waystation through Monarch Watch based on the farm’s pollinator gardens and Monarch habitat planted and tended over the years under the care of another farm volunteer, Donna Parrish.

Although no longer part of the summer staff team at AHCF, Hayley has continued her love affair with the Monarchs. “They need our respect and care,” she says. “Even if we aren’t raising and releasing them, we can protect their habitat here by not mowing down flower-filled grassy areas, and preserving milkweed fields. Planting butterfly gardens with nectar flowers like bee-balm and asters attracts many of our pollinators, but it is only the milkweed that the Monarchs need to lay their eggs and send another generation south in the fall.”

The legacy she inspired at Albion Hills Community Farm continues to this day, and when we raise our one Monarch at home and release it in the garden, I will thank our Monarch Momma and all she taught us. As Sarah McLachlan sings, “It’s just another ordinary miracle today.”