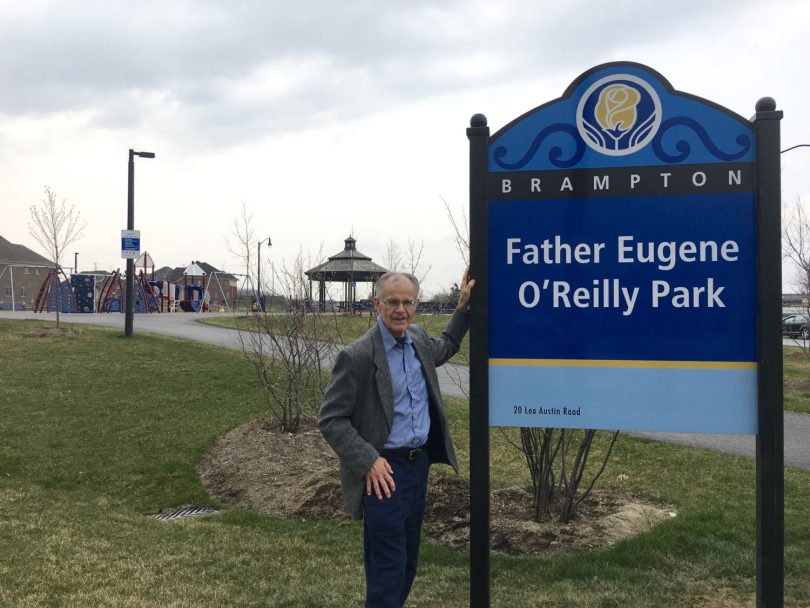 Long ago, among the beautiful emerald green hills of Ireland lived a young man by the name of Eugene O’Reilly. Born in County Cavan in 1796 O’Reilly received a good education, then settled down to marry his sweetheart Bridget Sheridan. Their bonding soon blessed them with a daughter, Margaret. But their happy story was soon to be one of sadness. Bridget died.

Stricken with grief Eugene could take the familiar surroundings no more. With determination he sold off his holdings and, together with young Margaret, sailed off for the New World.

In his sadness and despair Eugene turned to the church. After taking courses in Chambly, Quebec and elsewhere, the young man was ordained. There was a growing need for English-speaking Priests in Peel and Father Eugene O’Reilly was appointed to “the Parish church in the Gore of Toronto.” 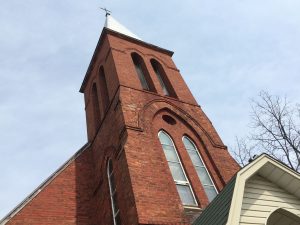 This area, the Gore of Toronto, eventually became known as Wildfield. It is the place where Father Eugene’s great great grandson Dan O’Reilly, a man very proud and passionate about his ancestry, lives and fights to preserve its heritage today.

Discouraged over a new housing development slated for tiny Wildfield Dan ultimately came to the conclusion that since it had become inevitable he may as well redirect his focus to preserving its heritage. And the memory of his great great grandfather.

He also initiated the construction of St John’s Agricultural College. After the College relocated to Penetanguishene the site became St Patrick Elementary School, the first school in what is now Wildfield.

As well, and at considerable personal risk, Father Eugene assisted emigrants fleeing the Irish Potato Famine during the 1840’s. 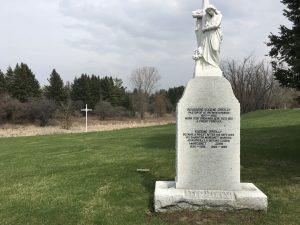 Dan, Wildfield-born himself, saw an opportunity to preserve Father Eugene’s memory by campaigning to name a park in the new Vales of Humber development after him. He called on other community members, like local Caledon historian Heather Broadbent, to reinforce his efforts by sending letters of support to the City of Brampton. You see Wildfield lies on Mayfield Road which is the dividing line between Caledon and Brampton, and the development is on the Brampton side of that line.

Dan’s efforts on this project began in 2010 and ultimately were successful. This year, at 20 Leo Austin Road, in the Vales of Humber, a beautiful new sign was erected at Father Eugene O’Reilly Park.

During his campaign Dan had made presentations at the City of Brampton. Soon he was contacted by someone from the developer’s office looking for a list of potential names for the new community’s streets. From that list came Sister O’Reilly Road (Dan’s aunt, who was the first Principle at the existing St Patrick’s School), Martin Byrne Drive (a former Reeve), and Leo Austin Road (another former Priest).

One could consider Dan O’Reilly a defender of Wildfield’s heritage. When a latter day Priest wanted to erect a cell tower at the back of the church property Dan got to work. He approached the Brampton Heritage Board who in turn had the property designated ending the cell tower threat. 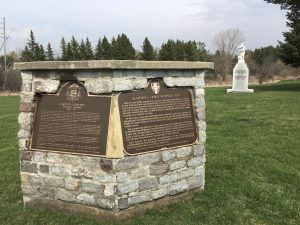 From a cairn commemorating the Loretto Wildfield Convent, to the restoration and lead lettering of Father Eugene’s tombstone, to initiating a project to mark the burial site of Father Francis McSpirit another Pastor that hailed from County Cavan, Dan remains a tireless advocate for the area’s history.

“I am so proud of what my ancestors accomplished” Dan beams. “I believe that’s why I have been so motivated to try to preserve Wildfield’s heritage. It hasn’t always been easy, but I feel moved by his spirit” he smiles.

“Although I was told the City of Brampton does not typically hold dedication ceremonies for parks I contacted Councillor John Sprovieri who graciously has arranged for it to happen”, says Dan. If anyone would like to attend the May 28th ceremony they should contact Dan for details at danoreilly@sympatico.ca

Editor’s note: JustSayinCaledon.com is dismayed to hear that about 10 days ago 2 plaques were stolen from the commemorative cairn on the St Patrick’s Church property.