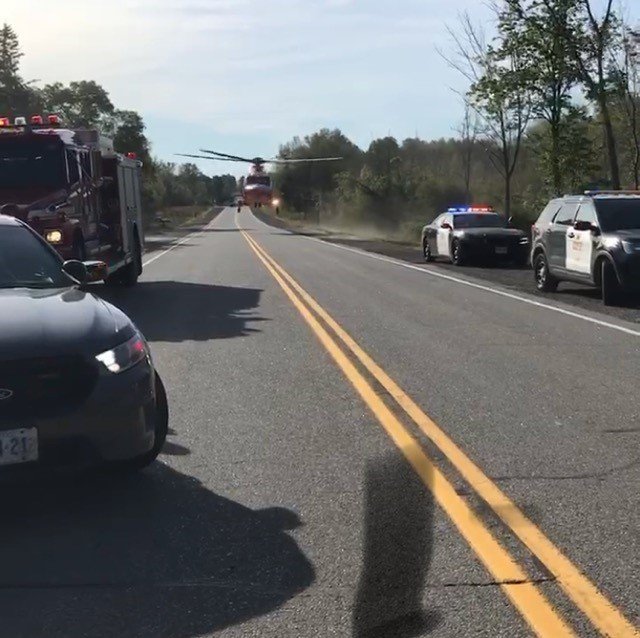 On Sunday, September 6, 2020, at approximately 7:55 a.m., officers from the Ontario Provincial Police (OPP) Caledon Detachment responded to a serious motor vehicle collision that occurred on Airport Road north of Old Church Road in the Town of Caledon.

The collision involved two motor vehicles, a red sedan and a black Sport Utility Vehicle (SUV). Initial investigation indicates that the red sedan was travelling southbound on Airport Road, when it entered the northbound lane and collided with the SUV that was travelling North at the time.

The driver of the red sedan sustained life-threatening injuries in the collision, and was airlifted to a hospital.

The driver of the black sedan was transported to a local hospital by land ambulance with non-life-threatening injuries.

As a result of the police investigation, Cody HOARE, 23, of St. Catharines, has been charged with the following offences:

• Operation while impaired – blood alcohol concentration (80 plus); and

The accused is scheduled to appear at the Ontario Court of Justice in Orangeville on April 29, 2021 to answer to the charges.

The investigation is ongoing. Caledon OPP is appealing to the public for additional witnesses of this collision. Anyone with information, dash camera, or home security video footage involving this incident is asked to contact Caledon OPP Detachment at (905) 584-2241 or toll-free at 1-888-310-1122.

You can also provide information anonymously by contacting Peel Crime Stoppers at 1-800-222-TIPS (8477) or online at www.peelcrimestoppers.ca. When you contact Crime Stoppers you stay anonymous, you never have to testify, and you could receive a cash reward of up to $2,000 upon arrest.