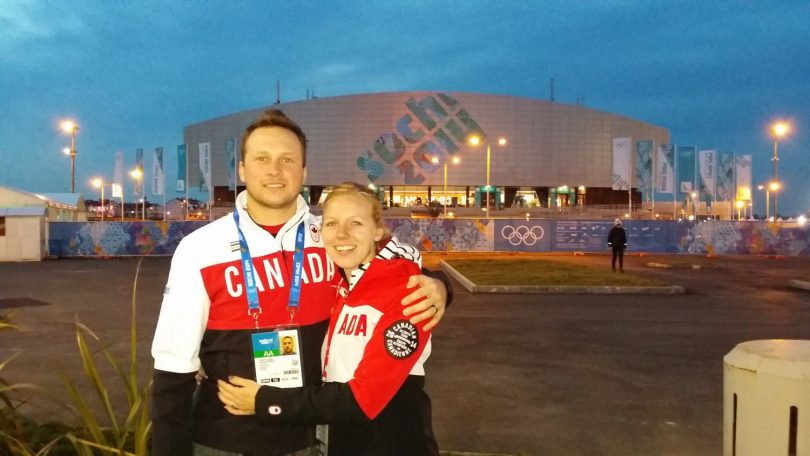 Please note: Our article below makes reference to Caleb being born in Sault Ste. Marie. We stand corrected: although Caleb spent his youth in Sault Ste. Marie his actual birthplace was Scarborough. Thank you Caleb for catching the error and clarifying for us!

Settling in to talk to Caleb Flaxey is an easy thing to do. That Northern Ontario-born, down-to-earth attitude and broad warm smile puts you at ease immediately.

And that broad warm smile returns every time we speak about his wife Allison or about his Sochi experience.

Caleb was born in Sault Ste. Marie while Allison is a native of Winnipeg. The two curlers met at the 2008 Tim Horton’s Brier in Winnipeg; Caleb was competing and Allison was volunteering at that particular event. Soon after the Brier Allison moved to Calgary to be near her brother and his family and Caleb followed.

After a romantic wedding in Hawaii in 2013 the couple found themselves putting down roots in Caledon East. Allison’s parents had purchased a new home there and the town seemed like a perfect fit for the newly-weds as well.

“We like that it is close to the city but feels far enough away” offers Caleb. “We love the trails, the greenery, the small town feel”.

As our conversation turns to Sochi and the Olympics you can feel hear and feel the pride in his voice. 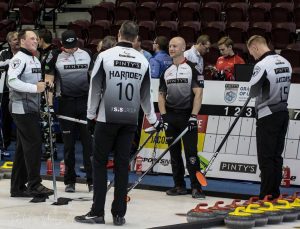 “Normally curling teams are 4 players” Caleb explains. “But when you get to the bigger competitions, especially the Olympic trials, it turns into a 5-man team. Team Jacobs was looking for a 5th man, an alternate”.

At the time Caleb was playing competitively with a team in Southern Ontario but he had played with Team Jacobs throughout his junior life as well as at the 2008 (Winnipeg) and 2010 (Halifax) Briers. His move to Calgary had separated him from the group for a few years.

Still when EJ Harnden phoned him “I was really shocked to get the call” says Caleb “It was exciting and surprising at the same time. I feel I am so incredibly fortunate to have been in that position”.

With the blessing of Allison, and his employer, Essilor Canada, Caleb jumped in. There was a mere a few weeks until the Olympic trials and they would be one of 8 teams – the best 8 men’s curling teams in Canada – competing to win.

And win they did, in the December 2013 Roar of the Rings trials. Now the team had just under 2 months before they would board the plane for their Sochi adventure. Last minute preparations and, of course, more practise, filled those weeks and in February the group was Sochi bound. 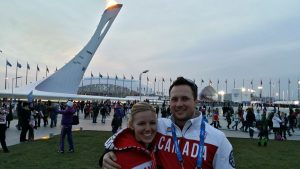 “But we built in a bit of a detour” says Caleb, “a few days at a place called Champery in the Swiss Alps. We needed time to just chill and to bond as a team, away from the media and the hustle of it all. To just get ourselves grounded again and back to square one. We had a nice cabin, a gym on one side of us and a curling rink on the other. We practised, had some great training sessions and, just as important, we relaxed. Then it was back to Zurich and onto a charter to Sochi”.

“We weren’t really sure what to expect when we landed in Russia, it was going to be the first time there for all of us. You know you hear different things. But I have to say Sochi was absolutely beautiful. Right on the coast of the Black Sea with the Caucasian Mountains in the background”.

“We were in a 3-bedroom condo on the top floor, and it was very comfortable. Really it felt like you could have been anywhere in the world. People were friendly. We never once felt safety was a concern. We really had absolutely no issues”.

And coming home with a gold medal was in Caleb’s words “surreal”. “It’s still hard to believe it all happened” he beams. 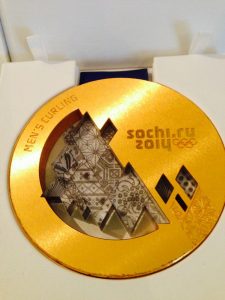 Back on the ground in Caledon, Caleb has his nose to the grindstone and continues to coach his wife Allison’s team. “I was very proud that they won the Ontario Scotties Tournament of Hearts, the provincial women’s curling championship, in 2014. But I was unable to attend the National event in Montreal because the timing conflicted with Sochi”. Team Flaxey plays out of Guelph and Caleb spends many evenings and weekends coaching the team. 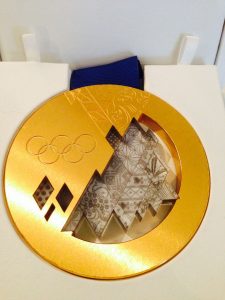 Earlier this year Team Jacob’s coach Tom Coulterman stepped down to spend more time with family. Once again Caleb’s phone rang. “They’re the best team in the world and they could be calling anyone. It’s very humbling that they called me. I am thrilled to be the new coach for Team Jacobs”.

Caleb meets up with the team when they are in the area for tournaments and some weekends he heads to Sault Ste. Marie for training sessions. “And we take advantage of technology” he adds, “using Google hang-outs and conference calls”.

“When you’re the number one team you have a target on your back” smiles Caleb. “You’re the team to beat”. “As for Team Jacobs our eyes are on Korea 2018″. 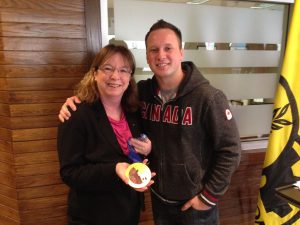