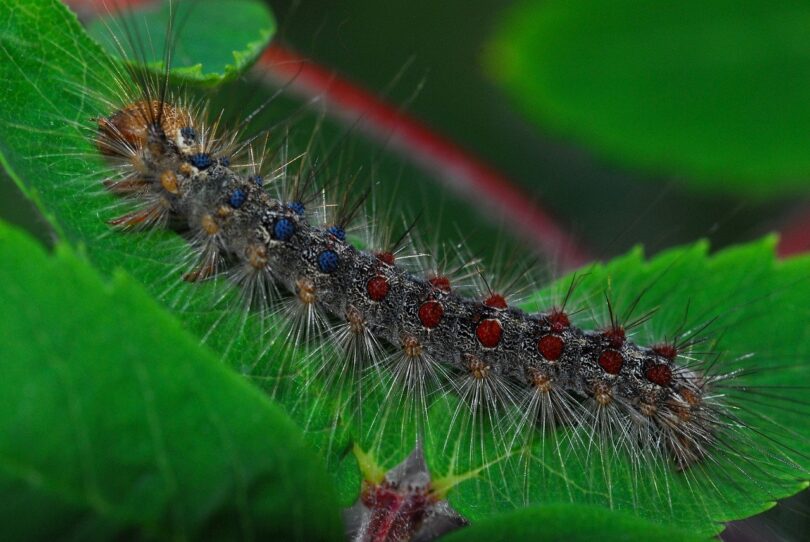 Caledon was invaded this summer.

We first got word on May 25th when the Albion Hills Community Farm was informed by the Toronto Region Conservation Authority (TRCA) that they would be spraying an insecticide called Btk to kill the Gypsy Moth caterpillars. That was only the beginning.

In our little neighbourhood adjacent to Fountainbridge Park in Bolton, the caterpillars were everywhere, defoliating the upper branches of our boulevard maples with gusto. Soon bands of tape of every variety began appearing on the trunks of trees. Usually peaceful neighbours were out with garden trowels decapitating every caterpillar they could find. Tanglefoot® insect paste was the hottest selling item from Bolton to Orangeville, as residents taped and pasted their trees.

And then the caterpillars disappeared as they pupated, hidden in the branches. A few weeks later, clouds of small brown male moths began fluttering down from the hardwood trees. More insidious were the flightless white females that began to crawl up the trunks after mating with the males. 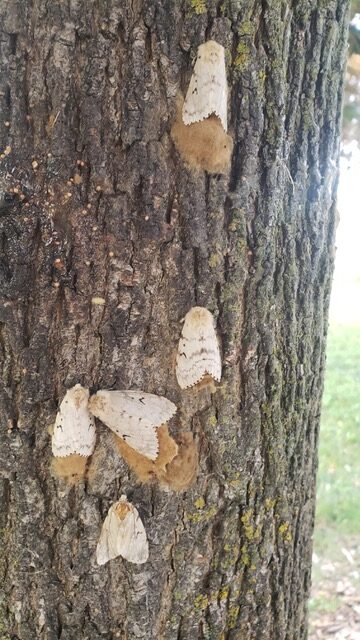 The females then began to lay small masses of golden brown egg sacs in the protective bark crevices of any tree they could find. Fortunately the females were easy to see and remove. We spent the better part of two weeks tracking the females and scrapping off their spawn from the trees in our park.

At this point we began to encourage neighbours to remove the tape from their trees as the bands were now become useless for stopping the Gypsy Moth cycle and were instead providing a hideout for an earwig invasion.

The surviving egg cases will overwinter and hatch in the spring when a new batch of caterpillars will begin their daily caravans up and down the tree trunks to feed. Keep your tape and your Tanglefoot® handy. You’re going to need it for the spring of 2022.

NOTE: some politically correct genius, thinking that the term Gypsy Moth might be considered denigrating to the Roma, tried to rename the Gypsy Moth as the LDD, taking the starting letters from the moth’s scientific name. The European Gypsy Moth was named because of its habit of moving up and down the trunks of the trees, a migration reminiscent of the Roma caravans. Simple as that.