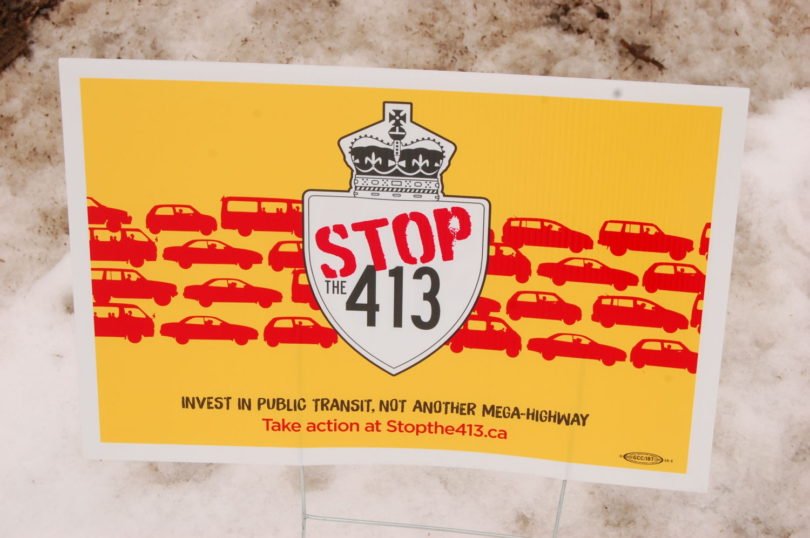 Editor’s Note: This is our third in an opinion series about the GTA West Corridor (Hwy 413). We have provided links to the other two at the end.

On the eastern edge of Bolton, in neighbouring Vaughan, is a large pristine and wonderful conservation area known as the Nashville Conservation Tract. It is the site of the Kleinburg section of the Humber Valley Heritage Trail in the Kirby Sideroad/Huntington Road area.

Readers who are familiar with the area and, who may have hiked the trail, should start taking photographs now. It may be gone in a few years, as the trail is the direct path of the proposed Highway 413 corridor.

With the possible exception of a developer’s attempt more than a decade ago to ram through a plan which would have drowned Bolton with thousands of residents – only to be thwarted by the courageous resistance of former Mayor Marolyn Morrison – Highway 413 is one of the most critical, defining issues facing the Town of Caledon since its formation almost 50 years ago.

Also known as the GTA West Corridor, Highway 413 would be a 59-kilometre long 400-style highway cutting through the heart of Caledon as it extends from Milton to Vaughan.

After an Expert Panel concluded that the damage to Ontario’s communities, the Greenbelt, farmland and water quality would far outweigh its benefits, the previous Liberal government placed a moratorium on the project in 2015 and then killed it in 2018.

Not long after the Doug Ford Conservative Government came into power they proceeded with plans to resurrect it. First notice of the plan was buried on Page 73 of an economic statement. Then, last year, it announced it intended to “streamline” or speed up the Environmental Assessment review of the project. In other words, weaken the process.

No doubt the government believed the majority of Ontario residents would be too preoccupied with the COVID-19 pandemic to take notice. But they have taken notice and are fighting back – just like they’re rising up all across Ontario against the pro-developer, anti-environment agenda of this government which includes the use of no-appeal Ministerial Zoning Orders to fast-track the building of warehouses and supercentres on wetlands.

Led, in large part, by Environmental Defence Canada, a grass roots movement is now surging in the municipalities Highway 413  would slash through. Very active citizen groups in Vaughan, King Township, and Halton Hills are working tirelessly against it. In west Caledon, concerned citizens have erected Stop Highway 413 signs on private properties in Inglewood and Belfountain and plan to install more when spring arrives.

(For some reason, which hard to fathom, the Highway 413 controversy has not gained much traction among Bolton residents. The writer has only been to persuade two homeowners with highly visible street frontages to take the signs.)

If there has been a pinnacle in this grass roots crusade in Caledon, it occurred in mid-February when Caledon resident and environmentalist Jennifer Le Forestier successfully persuaded town council to pass a motion requesting the Federal Government to conduct an environmental impact assessment of the highway. A motion to that effect has already been passed by the Town of Halton Hills.

As well, council also approved a motion by Caledon ward 3/4 Regional Councillor Jennifer Innis requesting the Toronto Region Conservation Authority conduct a voluntary project review. A similar motion was passed earlier in the month by York Region Council after several delegates called on that region to withdraw its support of the highway. York, though, is still in favor of the project.

What happened at Mississauga is arguably a game changer. No doubt the motion will be forwarded on to Peel Regional Council which could vote to oppose the highway as well.

Slammed by the Globe and Mail in an editorial as a “A “$6-Billion Sprawl Accelerator”, Highway 413 would be a monstrously expensive undertaking paving over farms, forests, wetlands, portions of the Greenbelt as well as have injurious impacts on the small headwater streams which feed the Humber, West Humber, Etobicoke, and Credit Rivers.

And that brings us back to the opening paragraph of this opinion piece. If the highway is not stopped, it will have particularly devastating impact on the Nashville Conservation Tract. It will cut the conservation area in two, destroy or seriously degrade wildlife habitat and migration corridors, spell the demise of the trail in that area, and end any hope of connecting the Bolton and Kleinburg sections of the Humber Valley Heritage Trail. A decades-old vision of a Humber Trail extending all the way from downtown Toronto to Bolton will be killed.

Want to more about the impact of Highway 413 on Caledon and why you should be concerned? Environmental Defence will be holding a Caledon-specific webinar on Tuesday, March 23 at 7 pm. You can REGISTER here.

It’s time for Caledon residents who care about protecting natural areas and the preservation of farmland to take action. Please consider contacting Mayor Allan Thompson or your respective ward councillors, email addresses are listed below.

Related article: Time to Use Your Powerful Voice to Save Caledon