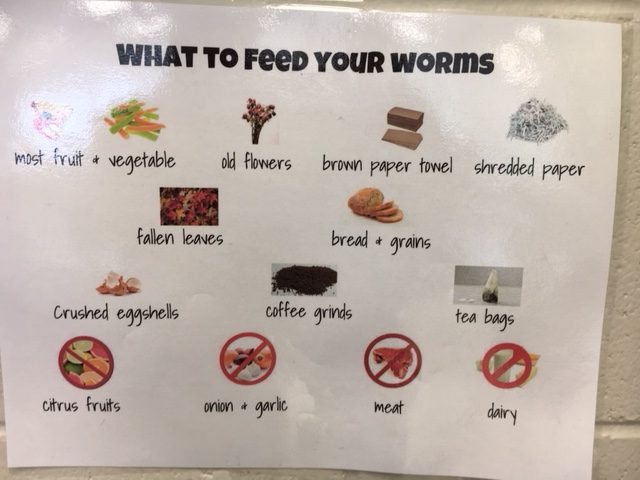 THINK back!  Way back . . . even as far as grade school, when small boys would torture their girly classmates by dangling worms in their faces, eliciting screams of terror to the boys’ supreme delight.

This week I visited three classrooms at James Bolton School. I wanted to learn more about worms in the classroom, or as it is more commonly known: vermiculture.  Webster’s describes it as “the use of specially bred worms to convert organic matter into compost”.

I stepped into Mme. Robin Dornan’s grade 3/4 classroom first and asked the obvious question – Why?  Why all these tiny, squirmy worms in a bin-full of food scraps?  A few girls were only too happy to enlighten me.

Nine year-old Scarlet Tumer explains, “It’s to help the environment.” And we got into a discussion of what happens when food waste gets tossed into the trash bin and eventually into landfill.  We didn’t go into methane gases (more dangerous than Co2) rising from this, but it’s an obvious chemistry lesson to come.

Claire McAuslan, also nine, admits, “At first I was squirmy, then it got more interesting. We’d look, and all the food (scraps) was gone.  Sometimes there was too much for the worms to eat.”

“And then,” agrees 10 year-old Victoria Marcuz, “we would have to take some food back or it would go moldy.  You can’t give them bread. It gets moldy.”

In fact not all food is vermicompostable. No citrus fruits, dairy or meat is allowed. These worms are strictly vegan. Haileigh Temple from grade 5 explains that lettuce is good if it is without salad dressing. 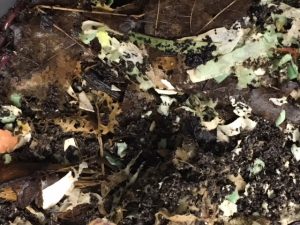 How did all of this begin, I wanted to know. I discovered that it was a grand merging of minds of women who nurture.  It began when the student Eco Club at James Bolton was choosing a project for the year.  Would it be ‘phasing out single use plastic water bottles’, or ‘school-wide composting’? The latter won, but then the problem of “how to” arose.  Since there is no organic waste pick up for schools, what would be done with the food waste?

“How do we compost?” asked Mme. Dornan, who leads the Eco Club. “It was so overwhelming and discouraging with such a high food waste in our school.”

Grade 5 teacher, Mme. Danielle Belle-Hopkins had an answer.  Her colleague, Betty de Groot, from St. John the Baptist School, had been vermicomposting for years and had worms to spare. Pam Reilly, another colleague who teaches at Father Francis McSpiritt, was keen to adopt some worms for her classroom. What do these teachers have in common aside from an interest in worms? All three are part of the Caledon DrawDown team, and they were on a mission.  They knew that out of the 10 top ranked solutions to Global Warming, tackling Food Waste is number three, and that they wanted to be part of the solution.  But more than that, they wanted to show it to and share it with their savvy students.

“We had a mini DrawDown meeting,” Mme Belle-Hopkins laughs.  “Betty came with buckets of worms.”

To date, Ms. De Groot’s traveling worms have populated five classrooms at James Bolton and at least one room at Father Francis McSpiritt.  Each class now has its own colony. Eco club members look after the kindergarten’s worms and Mme. Hainz’s grade ones are learning to cut up banana peels and carefully add food scraps all by themselves.

I ask what is the best thing about the project, and even though I ask it individually and separately, I get the same answer back.  In Victoria’s words: “We’re helping the environment. We’re not just forgetting about it.  Some people put compost into the garbage!”

For their teacher, the best thing was, “Seeing them so enthusiastic about it.  And seeing it carry over into classroom discussions like – ‘Oh, I told a waiter at the restaurant that I didn’t want a straw’, or ‘I’m encouraging my mom to use cloth bags’.  Just seeing how much they want to learn about it and having it transfer into different parts of the curriculum.”

I am calling the next generation the ‘REgeneration’. Their pure wisdom and sincerity, when driven by a nothing-can-stop-us attitude and an Earth-centric intelligence, is exactly what is needed now. And I’m betting on them.  All they need is a little guidance and support. The above model is a shining example.

To learn more about DrawDown (how to reverse Global Warming), visit:

Kathryn (Kay) MacDuffee thinks of herself as a learner/teacher/seeker after truth.  She’s lived in Caledon before it was Caledon. A retired educator and journalist, her brimming energy keeps her active still in both. Her secret? An attitude of gratitude.