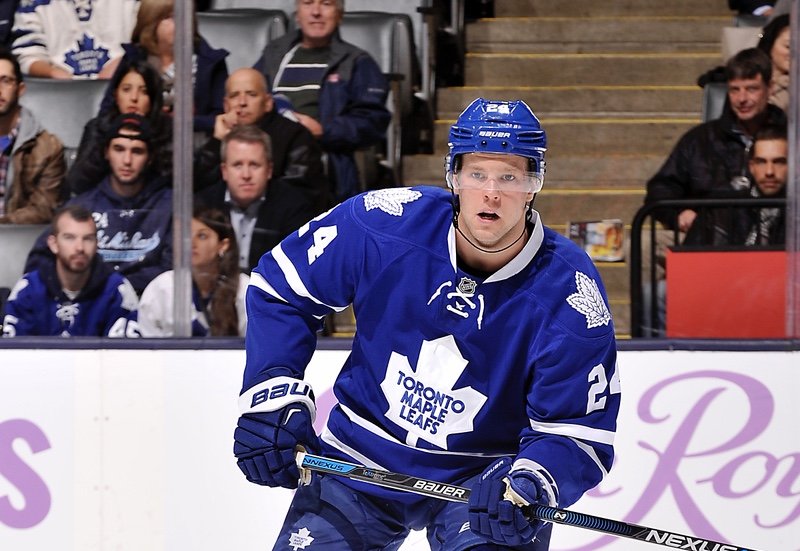 As a a long-time Toronto Maple Leaf fan (yes you really have seen a TML flag flying on the front of our garage) it was a thrill to meet Peter Holland at the recent Bethell Hospice Caring for our Community Lottery Launch at Fines Ford Lincoln in Bolton. But the talented young 6’2” centreman really made my day when he agreed to an interview with Just Sayin’ Caledon.

Peter moved to Caledon from North York around the age of 4 when his parents decided they wanted a little more open green space around them. His first school was the Pumpkin Patch, followed by Palgrave Public School, then Allan Drive Middle School and finally the Humberview Secondary School.

It was the pond on that property in the Cedar Mills area, just north of Bolton, that allowed Peter’s dad to provide his son with a backyard rink. “I think he had me on skates as soon as I could walk” Peter laughs. 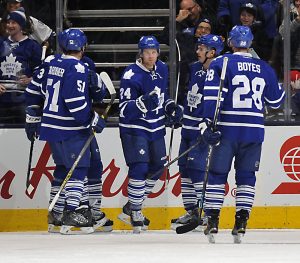 Describe your journey to the NHL

“I played most of my Minor Hockey years in Brampton just because Caledon was a Double A centre and Brampton was Triple A” he explains. “I played there for 9 or 10 years and then was drafted first round to the Guelph Storm with the OHL. I was lucky enough to play 4 years with them.”  After his second year with Guelph Peter was drafted first round to the Anaheim Ducks. “So when my 4 years in Guelph were over I went and played a year in Syracuse with the Anaheim Ducks farm team. The following season I split time between Norfolk Virginia, where the Minor team had moved to from Syracuse, and Anaheim itself”.

It was in November 2013, that Peter was traded to the Leafs. And it is a day that stands out as his favourite hockey moment to date. “It was pretty cool” Peter recalls. “I was in Anaheim’s Minor’s League system on a road trip. It was like a dream come true in one phone call; it was surreal.”   Peter says it took a while to sink in that he was becoming a Maple Leaf. But the dream turned into reality pretty quickly as he played his first game that Saturday in the Air Canada Centre, and televised on Hockey Night in Canada.

The man in the #24 jersey says his second favourite moment was scoring his first goal as a Toronto Maple Leaf. It was another quick milestone in just his third TML game, playing against the Nashville Predators.

The young hockey star admits to growing up a TML fan. “My room back in Caledon is still decorated with Maple Leaf memorabilia. It’s pretty cool to play for the team you grew up idolizing.”

Asked if he’s hoping to stay a Leaf there’s no hesitation “For sure! I’d love to stay here. I really believe we are turning the ship around. Although we haven’t had a lot of success in recent past I firmly believe there are brighter days ahead and I would love to be part of that solution.”

“There’s no doubt we are really busy during the season. There are times we are fortunate to get an 8, 9 or 10 day stretch when we are home but it doesn’t happen too often like that. We play almost every other night. We always travel to away games the day before the games. And if we play back-to-back games we fly out that night right away. On the road we fly out right away whether we are coming home or going on to the next city.”

“There’s a lot of nights we spend in hotels. It’s go-go-go that’s for sure, but it’s fun. Still you definitely cherish your time in the off-season.”

How do you spend your free time?   “I’m pretty normal, I don’t do anything too crazy” he laughs. “My parents have a cabin in the Muskoka area and I like to get up there on the weekends in the summer. I golf a lot. I like to just hang with friends.”

“The Toronto Maple Leafs do a lot of initiatives around the community” he adds. “If you are a role model it’s important to give back and I think being a Leaf that is “exaggerated”. You are definitely in the spotlight so people really appreciate the time you donate and come out and support whatever cause.”

“Something that really hits home for me is the Sick Kids All-Star Gala in June. I am part of the Committee and I’m heavily involved. Last year we were able to raise $75,000 and this year we are hoping to surpass that. There are performances, professional notables from the GTA, a Silent Auction and a Live Auction. Myself and P.K. Subban from the Montreal Canadiens are the athlete ambassadors this year.”

As we close Peter talks about how much he enjoyed growing up in Caledon. “I made some good friends that I still stay in touch with. Even my teachers were great. A couple of weeks after I was traded I got a card in the mail from my grade 2 teacher, Mrs Copeland, congratulating me on making it to the Maple Leafs. I thought that was pretty cool. I was probably that kid in her class that always talked about wanting to be a Maple Leaf. She probably thought “Yeah, whatever buddy”. So she must have thought it was very cool that I actually made it.”