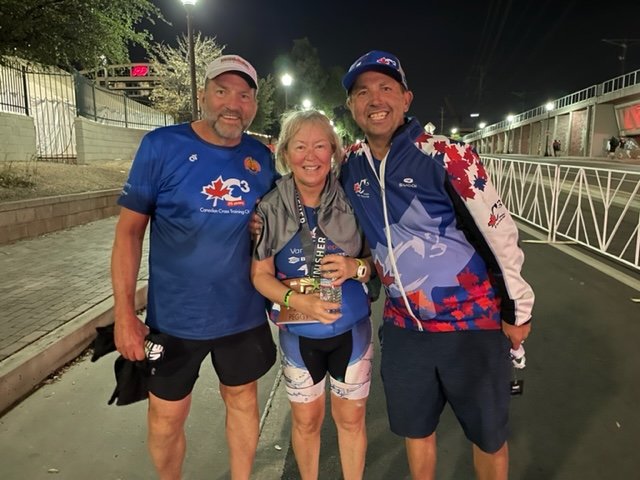 Peggy and Jim Reid are not your average senior citizens.

Peggy 63, and Jim 67, have been long time citizens of Caledon living on Rockwood Side Road just off Olde Base Line Road.  Eighteen years ago, the couple met C3 Canadian Cross Training Club’s Barrie Shepley.  Their twelve year old son Taylor, wanted to improve his running and joined the club.

Within a year, Taylor was winning running races and also wanted to expand further into triggeathlon training.  Supportive mom and dad, started getting up a few mornings a week to get Taylor to morning swim workouts.  Over time, Taylor went on to become a National Junior Triathlon Champion and was a stop cross country runner at both Mayfield High School & McMaster University.

After years of watching their son train, Peggy and Jim decided to get involved in the training themselves.  At first it was just easy jogs and then the local Caledon Kids of Steel Triathlon.  Eventually the couple trained harder and went further. 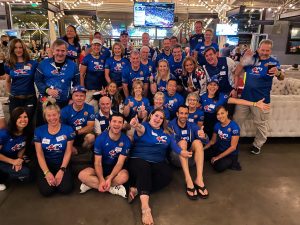 Luis Lopez and his C3 team mates at Ironman Arizona

This past month, the dynamic duo were a part of 45 Caledon C3 Club athletes who went to Ironman Arizona in Phoenix.  The purpose of the Ironman race was to honour team mate Patricia Lopez who was killed in August 2020 when a truck went through a red light and hit her car.  Patricia’s husband Luis Lopez and many local athletes all committed to training for the 2021 Ironman Arizona in Patricia’s name.

An Ironman is a 2.4 mile swim, 112 mile bike and 26.2 mile run.  It is a massive endurance task and something that only 1-2% of the population could successfully complete in the 17 hours of allowed time.   With 90 seconds till midnight, Peggy Reid crossed the finishing line to succeed and to honour her team mate.  Jim Reid was ten minutes ahead of Peggy proudly waiting for her to finish.

“To have two sixty-plus athletes from the same family hit the finishing line on a very tough race day is truly incredible” said coach Barrie Shepley.   Peggy and Jim are better known for their photography (Peggy) and painting (Jim).

Luis Lopez and many of his C3 team mates crossed the line between 7pm and midnight, each honouring Patricia in their own unique way.  “Its been a tough last 2 years with the pandemic and Patricia’s passing, so having the C3 club celebrating together was a big milestone for all of us” said Barrie Shepley.