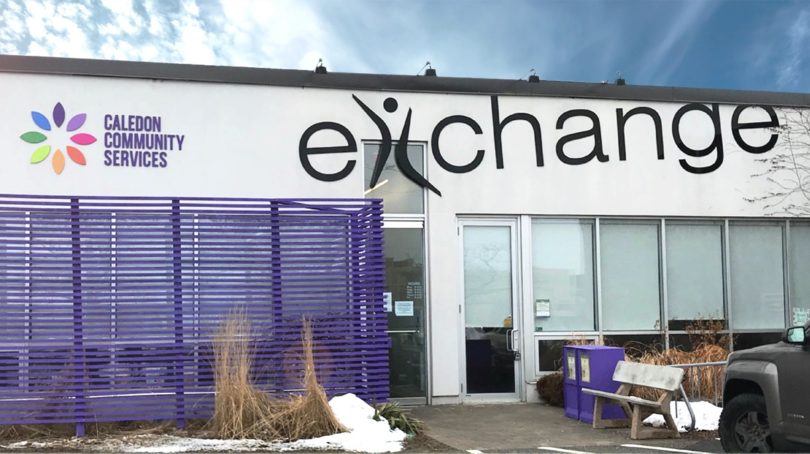 In the process of researching our story on MILKBAGSunlimited Just Sayin’ Caledon became aware that Caledon Community Services has been active in milk bag projects as well. We requested more information from them and received the following submission from Anna Lee Boschetto of CCS.

The milk bag mat project became a part of many activities at the Exchange after a long-time and dedicated community volunteer Tracy Smale introduced the idea.

After meeting Angela Kesthely of MILKBAGSunlimited at a bazaar at St. Cornelius Church in Caledon, Tracy became intrigued with the idea of creating sleeping mats from the outer milk bags. She saw it as a win/win since it would help divert plastic bags from landfills.

Tracy took the idea back to her home church Mayfield United, and then shared it with schools in Caledon East. At Mayfield several people got involved. People like Donna Armstrong who, along with Tracy and other church members, collected bags and wove mats. MILKBAGSunlimited shipped them globally to those in need.

Tracy, who is very familiar with Caledon Community Services, quickly realized the effort was a great fit for the Exchange. She went to Kim D’Eri, CCS’s Manager of Community Animation.

At the Exchange we want people to be able to give back, to be involved, and able to do something with their hands” explains Kim. “Making sure they can help make good things happen across Caledon and beyond. Connecting community is what CCS does.”

“For adults this has been a very therapeutic activity, like a quilting circle” Kim highlights.

Adding the activity regularly to an Exchange visit allowed a local daycare to get involved by collecting and donating milk bags. High school students from St. Michael Catholic Secondary School and Humberview Secondary School learned how to weave small mats that were later woven together to create full size sleeping mats.

In addition, the “milk mat station” has been part of many other events including Family Day initiatives, where the Caledon public had the opportunity to experience all the Exchange has to offer. 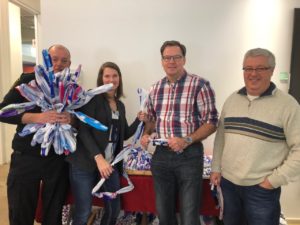 Even the Town of Caledon’s senior management team (SMT) learned more about the initiative while on an Exchange visit. They were able to see an example of a completed milk bag mat that had recently been woven by a small team of 7 or so congregants from Claude Presbyterian Church. David Clarkson made the frame, and eager participants met several Saturday mornings and wove the squares. Faith Clarkson sewed the finished squares together.

“For Town of Caledon SMT it was an opportunity to gain a better understanding of the effects of community collaboration and needs of the Caledon residents” says D’Eri.

About 4 dozen mats were completed through the Exchange. While some were distributed globally through MILKBAGSunlimited many of the made-in-Caledon mats found their way to local people in need including a shelter in Peel Region.

The milk bag mat project continues as a larger effort throughout Caledon and certainly other people and other groups are busy making mats that haven’t been featured in this story.  These efforts are no less important.

Being able to bridge a connection between other organizations, corporate volunteer teams and schools, is part of what makes the Exchange such a unique hub for community for initiatives in Caledon.

In the more than 11,000 times Caledon residents have walked through the door of the Exchange they have been given a chance to lend a hand and give back to their community.

“Hands-on projects such as this really increases social connections. It’s so great when people are able to do something with their hands that also connects them with someone in need,” says D’Eri.

Milk bag collection has not stopped so additional mats will still be produced. If you have a group that would like to get involved at the Exchange, contact Kim D’Eri at kderi@ccs4u.com once the pandemic restrictions lift and the Exchange is again welcoming volunteers and groups you will be able to try the experience first-hand.

UPDATE: CCS now advises that they will accept outer milk bags that have been washed, dried, flattened and bundled into quantities of 50 after the pandemic protocols have been lifted.