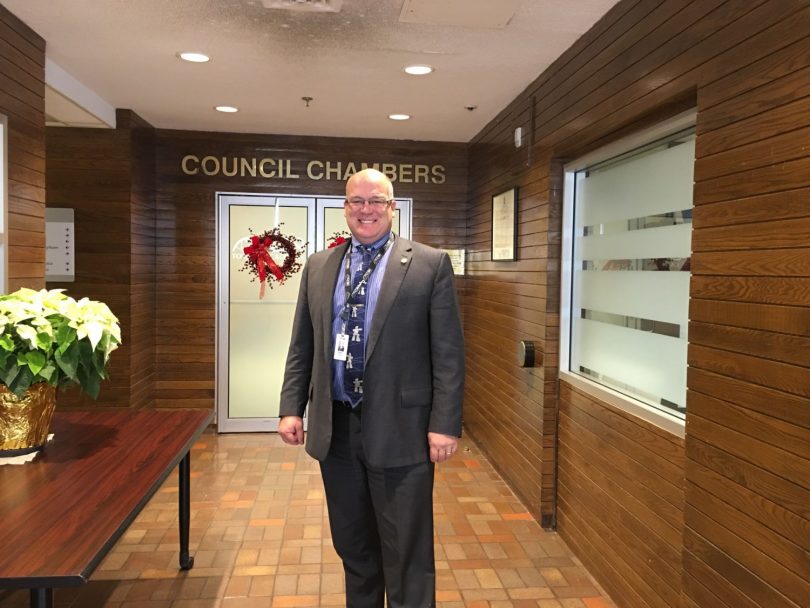 It was, in some ways, a tough year for Caledon Mayor Allan Thompson.

“Not long ago someone said to me “actions speak louder than gossip” and really that has been key to getting through this year” said Thompson during a recent interview with Just Sayin’ Caledon. “My philosophy was just keep moving ahead and let my actions speak for themselves”

Thompson was accused by Kelly Darnley and Charles Bristoll, both formerly of the Caledon Chamber of Commerce, of a conflict of interest when he sold his family farm.

And, although the Ontario Superior Court of Justice Hearing was in April, it was not until November 30th that Justice Peter Daley released his decision, clearing the Mayor of any charges.

Justice Daley went on to say that a “pecuniary (financial) interest must be present and real” and “cannot simply be potential, hypothetical or speculative.”

The Justice stated that Darnley had “put forward a patchwork of disconnected assertions” and “failed to present any evidence whatsoever supporting the allegations.”

Referring to Charles Bristoll’s application Justice Daley ruled that it had “simply piggybacked upon the Darnley application” and that it lacked “any cogent evidence whatsoever.”

Stone through a House Window

Then, over the summer, the Mayor had the unpleasant experience of someone throwing a large stone through a window of their home.

“To me it was meant to be a message” says Thompson. It went through 2 panes of glass and hit a wall 15 feet away on the other side of the room. It was not accidental, it was a message.”

Nose to the Grindstone

Meanwhile, Thompson kept his nose to the grindstone and focused on his role as Mayor.

Something that came through loud and clear in our conversation was that there are 2 major barriers to Caledon being able to attract and accommodate the industrial/ commercial tax base needed for sustainability.

Firstly, lands intended for employment are frozen pending the decision by the Province on the GTA West Corridor. And secondly, there is a lack of adequate broadband to support emerging industries such as intelligent manufacturing.

“Broadband is a big priority for Caledon,” says the Mayor “I have had over 700 businesses and residents tell me that they cannot get hi-speed adequate to function for their home or business. And if that many have taken the time to make me aware I know that means there are many more out there. Fibre build-out through the SWIFT initiative is now underway.”

Thompson continues “And the Province has given us the opportunity through the Whitebelt Visioning Exercise to look at protecting employment lands for the future. About 80% of Caledon is protected space, so we need to have a “dream-vision” for that remaining 20% if we want to keep it sustainable for our kids. We need to ensure a good economic base so that our future generations aren’t driven out by high taxes.”

Transit is another priority and a transit study is in January. Thompson expects the Consultant to deliver a report to Council in March. “If you want your commercial businesses to thrive, if you want our young people to be able to get to work, if you want our seniors to be able to age in place, then you need to figure out how to have affordable, sustainable transit.”

Thompson says he is happy that local residents are starting to see the benefits of the Enhanced Road Infrastructure Program passed by the last Council as local roads get some much-needed attention. And he is proud that the Community and Agriculture Fund was increased in the last budget so that the many volunteer-driven organizations can receive even greater support.

All in all it was a year of action. “There is always room for improvement, and we are making headway” he smiles.